"Power and Liberty" by Gordon Wood 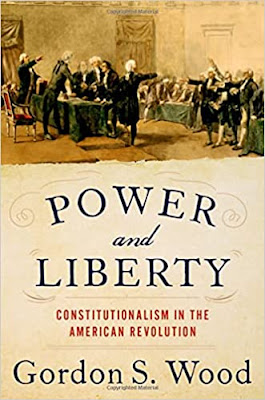 Wood is a good author to read in a time when so many calls are arising from the left-of-center to change the Supreme Court, do away with the Electoral College, repeal various constitutional amendments, and perhaps even rewrite the Constitution. His newest work, Power and Liberty: Constitutionalism in the American Revolution, tells the story of how the U.S. Constitution was actually born in the throes of the revolution itself, years before the Constitutional Convention of 1787.

Before the U.S. Constitution existed, the idea of written constitutions, especially in English history, was largely associated with governments. In other words, constitutions were all about governments and how they functioned along with customs, traditions, and common law. It was different in America. “By the end of the Revolutionary era,” he writes, “Americans had come to view a constitution as no part of government at all. It was a written document distinct from n superior to all the operations of government.” Instead, it functioned like a Bible, embodying the principles of government to be sure, but principles derived from the people.

Wood explains how this happened. Before the American Revolution, a debate emerged between America and Britain, which eventually became a debate with the British king. That debate culminated in the Declaration of Independence, which Wood calls “the most important document in American history.”

Constitutionalism was thriving during the Revolutionary War. The states were experimenting with a number of different approaches, and if something didn’t work, something else was tried. That constitutional ferment was reflected in the articles of Confederation, and it continued into the Constitutional Convention period.

The slavery debate at the Constitutional Convention happened in the context of the debate over representation for both large and small states. Slavery was more prevalent in the southern states, but every state had its slaves. Wood includes a reminder that slavery had existed for thousands of years, but the idea of ending it received a major push during the revolution and early republic. He also points to the emergence of the judiciary as a separate branch of government, instead of an extension of royal or executive officers. And this period also inaugurated what was one of the most radical innovations ever – the demarcation between the public and the private. The distinctions between these two spheres did not exist at the time the Constitution was approved and implemented.

Power and Liberty is a relatively short (and highly readable) book – 188 pages of text, excluding notes, bibliography, and index. But it is an important book, important in that it helps explain what was happening at the time the Constitution was written, the vital developments leading up to it, and how it changed American (and the world) forever.