The Gentleness of Attila the Honey 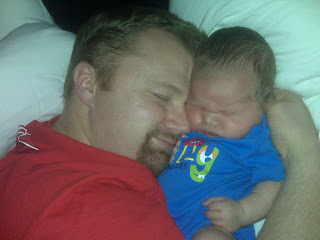 Eight years span the births of our first and second children.

There is a reason for that.

Our firstborn is the one people say you should have second, because if you have him (or her, but it’s usually a him in these situations) first, you may end up with an only child.

He was four-on-the-floor from the get-go. A salesman, the life of the party, Mr. Totally Gregarious born to two quiet, relatively introverted writers and readers.

He walked at nine months old, and he walked for one day. Then he ran. He never stopped. And he was quick.

He loved (loves) sports. During the 1984 Olympics, we must have depleted two rolls of masking tape so he could “burst through the ribbon” and win the race. About the same time, we found him awake one Saturday morning at 6 a.m., watching golf on TV. Golf!

Mr. Rough-and-Tumble played soccer, and basketball, and baseball (his true sports love). The way he played, basketball was a contact sport; he always looked so surprised when the refs called a foul on him. And baseball was the most intense experience anyone could ever have.

Gentleness was about the last word one would use to describe him. Except we, his parents, knew better. We knew his tender side.

That’s why we called him Attila the Honey. (I’ll take credit for the nickname.)

The University of Missouri survived Attila, and he went on to gainful employment. He eventually landed in Phoenix, helping to manage a semi-pro baseball team in a new league. His ability to network was amazing. His ability to talk to anyone was even more amazing.

Then at his church, in a young adults group, he met Stephanie. We met her when we spent Christmas in Phoenix in 2006. And the “honey” side of Attila the Honey began to become plainly evident. She brought out the tenderness and gentleness in him.

Not quite two years later, they married. And about a year and a half after that, they came up with Cameron.

To watch Attila the Honey with his infant son is one of the sweetest joys I’ve had as a parent. 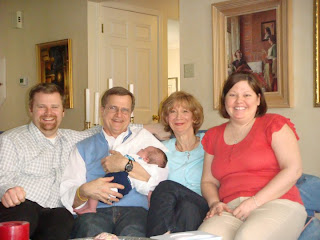 If you’d like to read other posts on gentleness, stop by the One Word Blog Carnival over at Bridget’s Chumbley’s place, One Word at a Time.
Posted by Glynn at 8:51 PM

This is a wonderful tribute to your son, and to his parents. :)

That's the reason there's a big age difference between my brother in law and my husband :) Too funny!
What a sweet post.

Very sweet. I found you through our mutual acquaintance, the shrinking camel. The joke you couldn't tell him? I've a feeling that a "little nonsense now and then is relished by the best of men."

Glynn,
I think your son comes by his gentleness honestly...the apple has apparently fallen close to your tree.

Oh Glynn ... What a terrific glimpse into what happens when two parents let their kid grow into who he really is. You have a beautiful family.

Attila the honey he is indeed and I am the lucky woman who is in receipt of such tenderness.

Great nickname! and what a wonderful tribute to your son and you and your wife and his wife and of course -- the amazing infant son who tamed Attila without lifting a finger.

Glynn, what a sweet, loving family that would make any father proud. I always enjoy reading your posts, especially this time the part about the masking tape :)!

Sometimes it takes someone else to bring us out from hiding, I guess!
Love the photo.

You really do have a nice family, Glynn.

Love the nickname, the story, and the picture. What a special family you've been blessed with, Glynn.

What a great story! It especially touches me because I am raising a teenage boy and starting to learn his "adult" personality.

The picture says it all.

Great nickname and a great tribute to your son. I have "Attilas" and as they age I see God's gentleness growing through them.

Thanks for sharing!
Jay

I like your son already. A sports guy! Cool story and well written.

A wonderful and touching tribute- thanks Glynn. :)

Awesome story Glynn! Thanks for sharing it with us.

Kept me grinning all the way through it... can't be better than that.

I love it that they "came up with Cameron," Glynn. What a brilliant thing for them to do.
This is such a heartwarming post. There is nothing sweeter than watching our grown sons tenderly holding children of their own.

I so love this! Attila the Gentle.

I can't wait until my son is older and I can look back at the "terrible twos" and (excuse me) "f-in fours/fives". My son is much like yours. But he's tender too. Thanks for the wonderful post.

Your story makes me think that gentleness--REAL gentleness--might be easier to experience than to describe.

It's a good reminder that who we are speaks louder than what we say.

Sweet family! So nice to get a little glimpse into the faces and souls behind the blogger!