Credibility -- It Was All in the Numbers 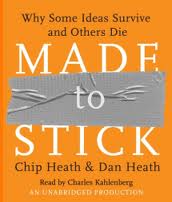 For the High Callings Blogs, we’ve been discussing Made to Stick: Why Some Ideas Survive and Others Die by Chip Heath and Dan Heath. Last week, we focused on the third characteristic of why some ideas survive –that of concreteness (the first two being simplicity and unexpectedness).
I gave an example of the company I worked for in the late 1980s, and how it dealt with a new law requiring disclosure of toxic emissions to air, and water. What the CEO did was announce a goal to reduce toxic air emissions by 90 percent by the end of four years. It was a startling goal, one which evoked skepticism from both within the industry (and other manufacturers outside the industry) and from the environmentalist community. “Impossible,” said the first group. “They’ll cheat and lie,” said the second group.

As it turned out, the answer came from what created the issue in the first place – the public reporting of the data on an annual basis. Reports had to be filed with the U.S. EPA. The reports would be made public. If the air reduction program was making progress, the reports would show it. Numbers. Data. Examples from almost 30 manufacturing plants. Filed with and checked by the EPA.

Inside the company, there was a debate about the chemicals involved themselves. The 120 or so chemicals on the list had been derived from two different lists of chemicals, all thrown together to make one list (such is how regulations often occur). There were some materials on the list that were harmless, and those would likely be removed eventually. There were other materials not on the list, but should have been. Obviously, some things would be added. What could you do if the base from which you were measuring was going to be changing over the four-year period?

The decision was made to adjust accordingly. If a chemical was taken off the list by the EPA, it would be removed from the reduction program as if it had never been there. If one was added, it would be added to the reduction program as if it had been there from the beginning. This took careful planning and some calculated guesswork as what the EPA was likely to do. But it was absolutely critical for the credibility of the program, even if it made things complicated.

In Made to Stick, the Heath brothers cite the kinds of things that made an idea, a program, an initiative or any sustained effort credible:

• The source is reliable and believable. Few might believe a chemical company, but data checked and verified by the federal government would be.

• The information has lots of vivid details. The reports would cover 120 chemicals and, for the company, more than 30 facilities, both large and small. Reports would be made available by zip code. There would be plenty of detailed ways to measure whether the reduction program was working.

• Statistics are used. We had more statistics than you could imagine.

• Statics are brought to human scale. A billion pounds of toxic air emissions in the United States sounds large but almost meaningless. But 250,000 pounds in Alvin, Texas, made the information much more real to people who lived in that community.

• One example alone may prove the case. Early reductions were published, with details of how they had happened.

The program wasn’t easy, but it stuck. It inspired a host of similar initiatives within the chemical industry and beyond. It was extended beyond air emissions to include water and land, with the same reporting programs.

And at the end of four years, it had succeeded, confounding all the critics.

Laura Boggess is leading the discussion on Made to Stick over at the High Calling Blogs. Last week's discussion, on "concrete," can be found here.

On Concrete: As Concrete – as the Air
Posted by Glynn at 5:00 PM

Email ThisBlogThis!Share to TwitterShare to FacebookShare to Pinterest
Labels: High Calling Blogs, Made to Stick

As my husband says, "The one with the facts wins."

Thank you for your story, Glynn.

I have to say, though, I don't equate credibility with truth; and I become particularly wary when statistics are thrown at me as evidence of anything. Cynical? Maybe. But one has only to know the history of Vietnam or the Nixon presidency, the corruption of the big tobacco companies, the story of Iraq's invasion, the lie that became the Tillman narrative, or a few of the more recent examples of scienticists cooking their data to understand my feeling.

I love this second part of your story. I agree with Maureen. Seems like numbers have been deliberately skewed on many occasions in our world. Maybe has to do with exploiting that relationship factor? I found it fascinating that statistics are more effective when that issue was played up.

Your example would have been a great addition to the book. Thanks for showing another real example of how these principles and ideas apply.