The Final Blessing of 2010: Storm Poem 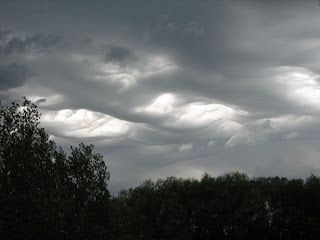 Yesterday morning, my son called to ask if I could babysit while he took my daughter-in-law to the doctor (eventual diagnosis: bronchitis). You want me to babysit Cameron? Then I rang their doorbell.

They live about 15 minutes away, in the St. Louis suburb of Fenton. They had the windows of their house open – it was unusually warm (mid-60s) for Dec. 31. A cold front was approaching, and a tornado watch had been issued by the Weather Service. Cold air + warm air = tornado possibilities. Although a tornado in December would be extremely rare.

Cameron was sleepy, snuggled in my arms. We were watching one of the bowl games on TV. Cameron had just dozed off when I heard the tornado sirens. Down to the basement we went, and waited. The sirens stopped; we went back upstairs to resume watching the game.

At 11:40, the sirens went off again, and down to the basement we went (my wife has trained me well). We waited for some 10 minutes before the sirens stopped. There was a lot of rain and thunder going on.

Half a mile away from the basement, right across the highway from where my son and daughter-in-law were waiting at the doctor’s office, a tornado hit the roof of a Catholic Church and smashed the rectory, hopped a parking lot and hit a subdivision, damaging or destroying several homes before moving on.

At 11:56 a.m., the sirens went off for a third time, and Cameron (sleeping through the whole thing) and I were back in the basement. Three miles away, about halfway between our home and my son’s home, a tornado had touched down, right in the area where my wife has her Pilates class. Twenty homes were destroyed. Power lines downed, cars and trucks flipped over like toys.

Miraculously – and I mean miraculously – no one was killed. Two minor injuries were reported. Other areas weren’t so fortunate. Three people died in Missouri and two in Arkansas. The town of Robertsville has virtually every building and home damaged or destroyed. (The St. Louis Post-Dispatch has extensive coverage and photos, but it usually hides everything behind the firewall after two to three weeks, so this may be a dead link by the end of the month.)

Reports say six tornadoes touched down in the St. Louis metropolitan area. My family was near two of them. Winds were estimated at 160-170 miles per hour, and the storm moved at something more than 50 miles an hour. A few minutes in duration – and lives could be changed forever.

It took three times as long to get home. Several major thoroughfares had to be closed. Traffic was snarled all over the southwestern suburbs. I didn’t see the major damage, but I passed damaged brick walls, large trees snapped in half and downed power lines. Neither my son’s home nor mine suffered any damage.

Last night, my wife and I watched a movie courtesy of Netflix (yes, a wild New Year’s Eve). We had our choice of a comedy series we’ve been watching or Amazing Grace. We picked Amazing Grace. Somehow, it was a fitting ending to the day.

Light.
In the backyard
I see a robin
pecking for worms.

I’ve linked this poem to One StopPoetry’s New Year’s celebration. To see other linked poems and stories, please visit the site.
Posted by Glynn at 10:31 AM

I've lived in an area prone to tornados most of my life, and it never gets less scary. It's such a helpless feeling. I'm so glad to hear that you and your family are safe. Praying for those who lost so much.

I enjoy the image of the robin at the end -- not afraid of the storm and taking advantage of its benefits.

Love how you end your poem.

Scary stuff. When my mother was living in Leesburg, Fla., a tornado came through and took down almost every house but hers. The development looked like a war zone. We've had tornados infrequently here in Arlington, and I'm grateful never to have been in the midst of one.

Amazing Grace indeed! My daughter and I drove the snowacane that hit NY last week and were so thankful for that grace. So glad that you and your family remained safe throughout the ordeal.

sometimes it's just scary when we see what nature can do with our illusion of safety and having things under control - nice poem also glynn - i like the unexpeted robin at the end...
happy new year to you

A scary way to start the New Year, I just watched all this being reported on the weather channel...we take our routine life too often for granted..and when it comes away not being a routine day..is where amazing grace becomes so important....glad you and family are safe....Happy New Year...bkm

so good that you and family are okay!
i can just see you going up and down the basement stairs with sleeping little one.

i sure do remember the silence and sickly colour of the sky right before a tornado.

open the windows and head for the basement.

and there was this trailer park in freeburg that got hit quite often. strange that.

Oklahoma here, so I know that green sky well. It's always terrifying--a terrifying boredom while you wait huddled up, hoping it goes somewhere else, hoping no one's hurt. And then, like your robin, life resumes. Not a bad new year's lesson at all, as your poem does an excellent job of pointing out. Glad to know you all are safe.

We lived in Omaha when one passed through ... the sound of a freight train accompanied it.

So glad your little grandson slept through it and that all were safe.

WOW
So sunny here and apparantly safe... astounding world this is
I am glad it is over and may the rest of the year shine for you
Loved the poem

So glad no one was seriously injured in your area -- sad about the others. So glad you all got home safe and sound.

And the poem is powerful.

I thought maybe you were writing fiction and realized -- no. it's all true.

Hope your New Year is calm sailing from here on in.

Thoroughly enjoyed reading this - the opening lines grabbed my attention and isn't patina such a beautiful word and notion. I love the way you brought memory in, in the second stanza as a thread to the word patina. And then the twist at the end to the here and now - perfect.

What a way to end the year, Glynn! But I keep picturing you, Cameron in your arms, up and down with the sirens, and I it makes me sigh at the safety in the arms of love.

Happy new year, friend. You have been such a blessing to me in 2010. So glad our good Lord brought us together in the crazy world of blogging!

Great end to one weird day! Blessings all around no one was hurt or worse. Great poem too!

Hi glynn..this was a really good write and the poem was great...was with you and the dutch master...but the last stanza is excellent...i see a robin pecking for worms..thanks for a different slant and for sharing and thanks for all the support...all the best pete