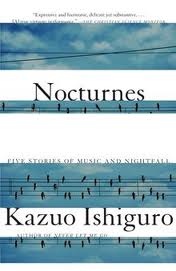 I think of a nocturne, and I think of a composition for the piano, played best in the evening, the time for considering the day just past, the time for quiet dreams leading to sleep.
The five stories in Kazuo Ishiguro’s Nocturnes have that dream-like quality about them. They are all about music but not, interestingly enough, the piano. And this is purposeful on Ishiguro’s part, for these stories are all about relationships that should be about one thing but are about something else, something slightly off, and the music flowing through them is also about something else.
In “Crooner,” a guitar player from Eastern Europe is hired by an aging American singer in Venice to play while he sings to his wife, he in a gondola and she on the balcony. These are love songs, special songs the two share, but they also turn out to be farewell songs, for he is planning, with her understanding and support, to divorce her to marry a younger woman and so help rejuvenate his career.

In “Come Rain or Come Shine,” an old friend comes to London from Spain to visit a couple he’s known since college and often visits; he shares a love for old American popular songs with the wife. But he finds this visit is unlike any other, with his friends each seeking to use him to resolve their marital problems.

In “Malvern Hills,” a guitar player trying to get his footing in the industry visits his sister and brother-in-law in the English countryside, and meets a German couple on vacation. Nothing is what it seems for any of the characters.

In “Nocturne,” the title story, the wife from “Crooner: is recovering from plastic surgery in a luxury hotel, as is a saxophone player trying to relaunch his not-quite-successful career. Their faces wrapped in bandages, they explore the hotel at night, and in the process explore their own motivations and desires.

And in “Cellists,” a young Russian cellist playing in Venice in cafes and the occasional recital is adopted and mentored by an older American woman. She guides him and herself into beautiful music, and an almost certain beautiful failure.

Ishiguro, author of The Remains of the Day, writes in a plain style, almost reminiscent of Isak Denison (these stories have that same kind of simple and slightly ironic sense to them common in many of Denison’s stories). But he has his own unique voice, almost the voice of the outsider, telling the stories of once-great, never-great and never-likely-to-be-great singers and musicians. For the characters of these stories, life will be at best a nocturne, never a symphony.
Posted by Glynn at 5:00 AM

Your brief summaries certainly make me want to check out this story collection. I like the subtitle of the book: "Five Stories of Music and Nightfall" and that, based on your review, Ishiguro maintains something of the music and the dreaminess in life.

Interestingly, the word verification is "polkybe", which makes me think of "polkas".

Okay -- so that book pile keeps growing thanks to you!

And my word verification is 'wayeles' -- which makes me think of wavelengths which leads me to music.... all sounds lead to the nocturne :)

Well, in keeping with the comments ... my verification word is cidendo which reminds me of crescendo ... a fitting build-up for your review.

I love this writer...

When We Were Orphans might be one of my all time favorite books.

Thanks for the review.