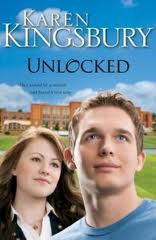 People in publishing circles call Karen Kingsbury a brand. That’s likely an understatement. Virtually everything she publishes hits the best-seller list. No, this is not “literary fiction” we’re talking about here. But she doesn’t make that claim. Instead, her novels are popular fiction that are anticipated, read and valued by her readers (there are more than 600 reviews of her latest novel on Amazon).

The simple truth of the matter is, Kingsbury knows how to write a good, engaging story. I read Unlocked in less than a day.

It’s the story of Holden Harris, an autistic teen mainstreamed into a suburban Atlanta high school, and Ella Reynolds, a school cheerleader who is being chased by the football team quarterback and is looking forward to an amazing senior year. Her life intersects with Holden’s, and then she learns that the two of them and their families actually have a past. And the superficial life of high school popularity begins to give way to something else altogether, as Ella becomes the key that might unlock Holden’s mind.

In Unlocked, Kingsbury tackles a number of issues: autism; the pressures of sports celebrity life; bullying in schools; teen suicide; walking away from faith. She handles all of them well, and the scenes of Holden’s autism manifesting itself and what is actually going on in his mind are drawn well and true. If there is any criticism here, it’s that, even with some disclaimers, Kingsbury veers too close to the vaccine-origin-theory of autism, the major medical study for which was just last week determined to be “fraudulent.”

But that’s a minor point. The story reads well and fast; the characters are drawn well and sympathetically. That the reader comes to identify so strongly with Holden is no small feat on Kingsbury’s part. And one learns a lot about autism, and what it is and isn’t.

Unlocked is characteristic of Kingsbury’s work and explains much about here success as a novelist. It’s accessible and readable; the story is familiar because we all know people just like those in the novel; and she deals with issues on a real rather than sentimental level.

This actually sounds pretty good. You seem to be quite the voracious reader.

Is it targeted to teens or adults (or both)? I'm always looking for well-written material for my two teen daughters.