Mystery Food in the Sudeten Mountains 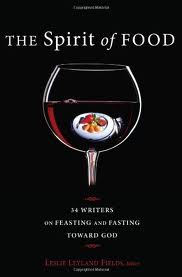 “Taste and see,” writes Deborah Leiter Nyabuti in “Cooking Chicken Wat,” one of the three essays in The Spirit of Food: 34 Writers on Feasting and Fasting Toward God being discussed this week at The High Calling.

Almost nine years ago, I was part of a small missions team (three of us in total, plus our guide) that spent a whirlwind week in Eastern Europe – Budapest, Prague, Brno, Dresden and Erfurt. We were a writing and video team, there to talk with and interview missionaries who were part of a Central European missions program.

It was a crazy week, with more time spent riding in a minivan than either interviewing or sleeping.

One of the decisions we had to make was whether or not to “taste and see” – either stick with tried and true (and recognizable) American fast food, which would have helped with our hectic schedule, or to eat local, even if local was five cities in three countries in six days.

We chose local, except for an unexpected side trip that left no time for lunch except for a drive-through at a McDonald’s in Chemnitz, Germany.

So I ate Hungarian goulashes (stronger and more seasoned that what I’d eaten in the U.S.); tomatoes with my toast for breakfast in Dresden; anything the hotel dining room had left when we’d get in after 10 p.m. at night, hoping the dining room was still open; and one of the best lunches I’ve ever eaten, on Wenceslas Square in Prague (despite the prostitutes handing out their business cards to the diners).

The most interesting meal happened in a small town in the Sudeten Mountains in the Czech Republic, not far from the German border. It was early evening, and this town was the last place we could stop if we wanted dinner before we drove through the mountains and then down into Dresden, with an arrival time of close to midnight (and we had to find the bed-and-breakfast where we had reservations).

The restaurant was the only one in town, and it looked very, well, Central European. The main entrance was the bar, and as we walked inside, all conversation literally stopped. Everyone stared. Yes, we looked American, and this wasn’t the kind of town that attracted tourists.

We waded through the fog of cigarette smoke and were seated in the dining room. No one in the place spoke English, including any of the waiters. The menu was in Czech and German. Our American guide was studying Hungarian. The most German any of us knew was the German I took in college. I did recognize a few things on the menu, and one of the guys decided to have whatever I ordered. The other two decided to go totally local and point to something on the menu list, even if none of us knew what it was and the waiter couldn’t explain it.

The look the waiter gave them should have been a clue.

I and the guy who trusted my German ate well – very well. We had a breaded veal dish with pickled vegetables. The other two didn’t eat well. In fact, after a few bites, they stopped eating. We all looked at what was on their plates, and none of us could guess what it might be. It didn’t taste like chicken, they said. It might have been something made from an animal brain, or perhaps a tongue. We took their word that it didn’t taste good.

My only mistake was the after-dinner coffee. I chose Turkish. It wasn’t that it was strong – that was expected – but I wasn’t expecting the inch of coffee grounds in the small cup. I think I learned that night what hot, liquid dirt tastes like.

I decided I didn’t need to taste that local. But during my prayers that night, I thanked my college German professors.


To see more posts on The Spirit of Food, please visit The High Calling.
Posted by Glynn at 5:00 AM

What an amazing experience, Glynn! Such an adventure. I think I would have had the same menu item as you also. Sounds like you did pretty well. How did the interviews and video turn out? Just curious...

Laura - the videos and stories turned out better than we could have hoped. the missionaries could use the videos for reports to home churches and supporters; we did a sldie show and video to help pormote the need for a permanent building - and the money was raised to do that; stories were published in several newsletters and church bulletins.

What an interesting experience. Didn't any of these folks speak English? I would have been worse off that you, relying on 9th grade German! But all in all, this is probably something you will always remember, compared to some rushed McDonalds meal in the car. SOmetimes that's the best way to actually dive into the local culture. Even if you can't eat the food!

Food is so identified with culture and this story reflects that

What a lovely story!

One of the worst of meals and the the best of meals I ever had was in Prague -- watered down soup, stale bread, but the intrique, the excitement, the wonder of, at that time, being behind the Iron Curtain. The meal paled in comparison to the fact I was with my two sisters. Very exciting. Horrible food. Great adventure.

Glynn, Your stories are always full of adventure and detail.

Scott says that Grandma Lee used to cook up the cow tongue. Yeah, ... no.

Thanks for your well-told, adventurous tale, Glynn!

I've wanted to go back to Europe for a while now and this post just stoked the flames a little higher. Great story, Glynn!

good story.
sounds like a rough yet memorable trip.

good to appreciate the teaching you received from your college professors. it surely paid off for you and your friend for that out of the way meal.

Food adventures are the best kind, aren't they? I think you learn a lot about people and culture when you sit down to a meal. When I was in China last year, I was amazed at some of the food they ate. Thankfully, I didn't have to try anything too crazy, but I did almost vomit from smelling the "stinky tofu" at the table next to us in a roadside stand.

Yeah, I had a meal like that in France once. I have never had that experience since (of not being able to eat something because of its fragrance :)

Oh, but I do love to try new dishes everywhere I go!

Great story, Glynn. The trip sounds like a true adventure.

I was born in Germany and plan to return for my 50th birthday. So...how do you say "veal" in German? Come to think of it, I guess I should also find out how to say "brain" and "tongue."