Brendan MacOdrum's "If You Read This" 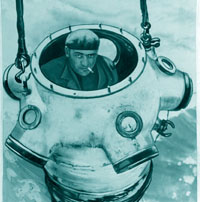 I just read a poem entitled "If You Read This," by Brendan MacOdrum at Oran's Well. It is a long poem, and no one writes long poems any more, that is, if they want them to be read.

I read this long poem. I read it straight through to the end, and then I read it again.

This is part of what I said in my comment:

"It’s rare when I’m moved enough to read something and think 'profound.' This is one of those rare times."

People often say today that no one will listen to a long speech, read a long book, or read a long poem. People say our attention spans have dramatically shortened, and we're only capable of sound-bite speech and sound-bite thinking.

I read "If You Read This," and I know people are wrong.

I'm really humbled, Glynn. Thanks, I really didn't think anyone would bother to read it, but it had to go up anyway. Thanks for showing that reading can defy a medium as omnipotent as this. -- Brendan

This poem demands more than most poems get these days: read once and forgotten.