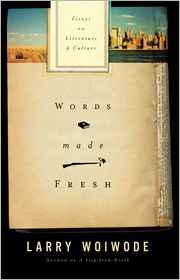 For years, I have been something of a fan of John Gardner: Nickel Mountain, The Sunlight Dialogues, October Light, and several other novels, children's stories, two works on Chaucer and On Moral Fiction. Part of the reason I liked him, I think, is that he had something of a black sheep reputation in the literary community -- he had outraged more than one academic icon because he tended to call writing as he saw it, and he often saw it very clearly.

In 1982, I read Gardner's Mickelsson's Ghosts. It was not an easy book to read; it required close reading to keep track of the themes, characters and narrative threads. Two things about the novel were implanted in my head, because I still remember them 30 years later. One was the main character, Peter Mickelsson, running out of money as he's rehabbing his farmhouse, and going again and again to the hardware store for supplies, even though he and the owner both know he can't afford to pay for them. The second had to do with the ending and I won't spoil it except to say part of it seemed a bit too pat to explain Mickelsson's ghosts and hallucinations.

Mickelsson's Ghosts was Gardner's last novel. That same year, he died in a motorcycle accident. He doesn't get much notice now, although I always thought he deserved more.

And now he shows up in not one but two essays by writer Larry Woiwode in a new collection entitled Words Made Fresh: Essays on Literature and Culture. Woiwode provides some remarkable insights into Gardner and his works (especially Mickelsson's Ghosts), but he also tackles Wendell Berry, Reynolds Price, John Updike, American public education, Bob Dylan and William Shakespeare.

Woiwode, poet laureate of North Dakota, is the winner of numerous literary awards and prizes and the author of five novels, two collections of short stories, a poetry collection and articles or stories in everything from The New Yorker and The Paris Review to Books & Culture and Image Journal. He is that rare combination of significant literary figure and writer and professing Christian. And it's that combined perspective that he brings to Words Made Fresh (an obvious play on "word made flesh").

These essays were published over an almost 30-year period, from the 1980s to the 2000s. But they are all current, all striking in their insights and all fascinating to read.

Woiwode explains how he came to live in North Dakota, not exactly the place where a leading literary light might reside. His understanding of Wendell Berry is concisely summarized: "...all land is a gift, and all of it is good, if we only had the sensibility to see that." (The essay includes a side discussion on Berry's publishers and the quality of the printed copies of his works.) His short essay on Reynolds Price underscores the point of Price's Three Gospels: "...the ability to view the Gospel narratives as stories encountered for the first time."

The longest essay in the collection is devoted to John Updike, arguably one of the most significant writers in American literature in the last half of the 20th century. He examines two Updike novels -- Of the Farm and Couples -- through the lens of faith and Calvinist/Lutheran theology; continues with a brief review of the Rabbit novels; and then spends time examining an essay by Updike entitled "A Soft Spring Night in Shillington," published in his memoir Self-Consciousness.

It's a remarkable collection. Woiwide brings something sorely lacking in so much literary discussion and commentary, an understanding based on faith and the standards that faith imposes.

And I gain new insights into John Gardner.
Posted by Glynn at 5:00 AM