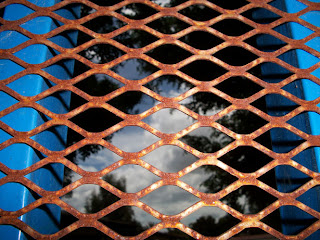 Atoms and molecules of oxygen
breathe life as they pick and stab,
chip and separate, corrode, a fleck
here, an abrasion there; the surface
disintegrating by acidic destruction
and natural disfigurement.

Words and phrases of a poem flow
across stone and metal, a gradual
erosion and wearing down of sharp
edges, leveling rock, pockmarking
steel and iron to create beauty because
they give life as they destroy.

This poem is submitted for Open Link Night at dVerse Poets. To see other poems submitted, please visit the site. The links will be live at 2 p.m. Central time today.

It is also submitted for the poetry and rust prompt at The High Calling.

Joseph Priestly was an 18th century theologian, clergyman and natural philosopher who is generally credited with the discovery of oxygen. According to Wikipedia, his scientific reputation during his life rested on his invention of soda water, his writings on electricity and his discovery of several “airs” or gases, the most famous one of which he named “dephlogisticated air,” which came to be called oxygen.

Photograph: Mesh Oxidized by Teodoro S. Gruhl via Public Domain Pictures. Used with permission.
Posted by Glynn at 5:00 AM

Both your poem and your text.

but.... how does one discover something that always was?

I like your use of "natural disfigurement" to describe what happens to make rust. The sense of randomness come in creating patterns comes across well.

way to bring the truth today glynn...our words are WMDs or oxygen needed to bring life...sometimes truth when spoje does wear away some of the rust as well that needs go...but you wrote this well...nice stuff man...

Reminds me of what Stevens once said of poetry - "speech made dirtier." Thanks for pointing out that our human nature is not so contrary to nature. We're all just keepin' on keepin' on. - Brendan

this should be part of those famous poetry quotes out there.
great write!

glad those words brought good... they can flow another direction

That second stanza is my favorite with words wearing down sharp edges and the giving of life as it also destroys. I read this a few times. Thanks, Glynn :)

Excellent write, Glynn. Had to read it twice :)

That is cool how poetry is the catalyst that makes the physical things, steel and stone, beautiful.... Metaphorically yes, life inside us can feel like stone and steel sometimes, heart wrenching things, cold, cold people, death, tragedy, oh my God your poem is powerful... Extremely thoughtful and deep...... It's a keeper. You must be a scientist.... As a layperson I only know that oxygen plays a part in oxidation... That photo of the rusted grate is perfect for your poem, just beyond the rust and pockmarked steel is the beautiful forest and sky... awesome...

Glen so well written and so well said it should be read more than once I sure did thanks for sharing
http://gatelesspassage.com/2011/09/20/the-fait-of-our-lands/

a gradual
erosion and wearing down of sharp
edges,

made me think of the power of God's Word... and my sharp edges, my stone and metal... bringing life and breath as though it (the Word) is the oxygen necessary for the refining fire.

Interesting bit of history in this one - who would've figured oxygen's official discovery came from such a source? Look at that priest go...and look at you go with this curious engagement with nature...

I often think about this, that the very things that give life also take it away. Very well said.

A complex thought rendered clear in a flow of image and well chosen words--and thanks for the process notes--I was just reading about 'deflogisticated"-whatever- air the other day somewhere while looking up another word--seeing the cycles and interrelationships is always amazing, and presenting them already seen to others is a true gift.

An interesting comparison - very relevant. I liked this poem

Sweeeeet. Heaven and Earth shall fade away, but poetry stand forever!!