It's been a long week

It’s been a long week.

I was going to post a book review today, but I flat ran out of time to write. And it’s a good book, too, one that I think we should all be reading – On Earth as It is in Advertising by Sam Van Eman. On Monday I will be posting a review of Shawn Smucker’s My Amish Roots.

This past Monday, and I’m sure I’ve said this at least 433 times so far this week, my novel Dancing Priest was published for Kindle at Amazon, and then for Nook on Tuesday. Both were supposed to go live on Thursday. So Monday and Tuesday became something of a scramble as plans got moved up.

On Tuesday and Thursday, I had my regular twice-a-week physical therapy sessions for my back. Physically, it’s been a hard week. The pain is abandoning my leg and beginning to center in my back, which is supposedly a good thing and possibly indicative of the bulging disc de-bulging a bit. But as the pain centers, it gets worse. Right now, there is no comfortable position sitting. Lying flat on the floor is the best position.

I talked with my doctor Monday, and made an appointment Wednesday with a neurosurgeon to talk about the possibility of surgery. The appointment to talk about it is not for two months – an indication of the back problems in St. Louis. But we’ll see if I can get in sooner to see what might be done.

So I’m battling pain while simultaneously being excited about the book, talking about the book, promoting the book, anticipating the print edition of the book. Did I mention I had a book published Monday?

We are also approaching the end of the remodeling project at our house. The kitchen was gutted and rebuilt. The powder room and master bathroom were gutted and rebuilt. The laundry room was gutted and is on the verge of being rebuilt. Old hardwood floors disappeared, replaced by new hardwood floors. All of the old carpeting upstairs and downstairs was replaced. The only room unaffected by all of this was the hall bathroom upstairs – and it had been remodeled a year ago. 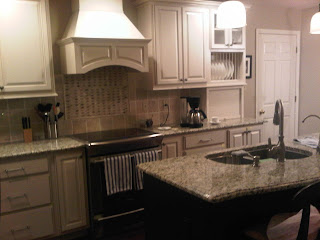 My wife is exhausted. She has pulled off nothing short of a miracle. The picture above gives some idea of what the new kitchen looks like – and you can’t even see the butler’s pantry on the right. Our bathroom looks like a big wow.

Along the way, we learned some things. Like all of the stuff the original builder either didn’t do or jerryrigged. Like how the old mirror in the master bathroom was held in place by a screw into straight drywall with no anchoring support, and nearly came down on top of one of the workmen.

But it all has gradually come together. We’re near the end of the project. One day soon we will reclaim the garage for our cars – it’s been a workshop for almost three months.

Life has been a little bit crazy.

Now, let me tell you about that book.
Posted by Glynn at 4:58 AM

What a great new kitchen! When we remodeled, we also found original builder issues as I came to call them, and the re-do (entire house) took much longer than promised but what a difference! You will be enjoying what is essentially a new house for many years to come.

Have a wonderful weekend. And get some rest!

Glynn. I can help. I'll be the butler if I can have the pantry. I'll give you plenty of adverbs and adjectives and cook a meal so your wife can rest. That's what friends do!

Wow, you are right about that week. I'm sorry you are suffering through so much back pain. My dad has spinal stenosis and disk problems, so I have witnessed what that kind of pain can do to a person's mood and energy level. I will pray that the pain abates for you, Glynn.

On a more positive note...yay for you and the book! I can't wait for it to come out in print -- since I am old-fashioned and haven't made the leap to an e-reader yet.

And can I just say that your kitchen looks beautiful?????!! What time is dinner???? (of course, you're both too exhausted to cook, so how about I just help myself?).

The joy and the pain ... how life jumbles them all together.

Prayers for peace, comfort, and healing as you celebrate your book and remodeling.

What an "up and down", "back [sorry re: pun] and forth" week. I refer to myself often as a "tough cookie". I think you're taking over for me right now, just b/c you need that to pull through this next stretch.

May our Father pour His peace, joy, love, and power into your body, soul, and spirit.

I hope that your back gets to feeling as good as your kitchen looks.

As to your back -- you really are amazing. To do all that and still be in pain and still be supporting writers and photographers and videographers all over the blogosphere... wow!

You really are amazing.

It's a bit of a roller coaster ride right now Glynn. I can't tell you how thrilled I am about your book. I will read it just as soon as I can.
I am so sorry about the back pain. I know a bit about it, having had scoliosis surgery in my 50's. I will be praying.
Your wife deserves a medal. I often think I'd rather just build a whole new house than remodel - you don't have to live in the middle of the mess!

I love how the cover of your book looks -- I am so excited for you. I can't wait to get updates on sales.