It’s been a while since a “Pleasantly Disturbed Friday” made an appearance. And even though they’ve been somewhat filed in the archives by their originator (one Duane Scott at Scribing the Journey), I thought it might be time for a reappearance. (There’s no official definition, but a Pleasantly Disturbed Friday is a blog post of random thoughts, events and observations, usually because you don’t have a specific theme or idea for that day’s blog post.) (This contribution fits that definition perfectly.)

Last week, we visited the St. Louis Art Museum to see the Monet Water Lilies Exhibit. Because it was the final shopping week before Christmas, the crowds at the museum were non-existent. There was no waiting in line, no fighting to see a painting or poster illustration, no massive throngs to maneuver through. Yesterday, we returned to the art museum, to see an exhibit of American paintings 1900-1945 and a few other small exhibits.

The museum sits within Forest Park, as does the Missouri History Museum, the St. Louis Zoo and the St. Louis Science Center. The weather was partly cloudy and high 50s. The park was packed. So was the museum. So was the Monet exhibit. I congratulated my wife on selecting last week as the time to see the Monet paintings.

One of the paintings we saw was the one at the top of this post – “View of St. Louis” by Joe Jones. The museum had an entire exhibit of his paintings a year ago. 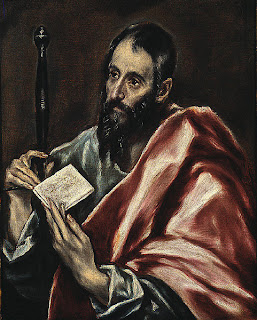 As we were leaving, we walked through the temporary 16th-17th century paintings area (just about everything at the museum is in temporary quarters these days because of a major expansion program going on). And I saw this painting, one of my favorites in the museum – El Greco’s “St. Paul.” It was painted between 1598 and 1600, and it simply does not look like it’s 400 years old. It looks almost like a contemporary painting to me. Perhaps it’s because the colors, or the expression on Paul’s face, but I always find it amazing.

I’ve been reading a lot in the last two weeks (I’ve been on vacation time). I read A.E. Housman’s A Shropshire Lad and wrote a post about it for The Master’s Artist. I read Alan Shapiro’s Night of the Republic: Poems and my review will be posted in January at TweetSpeak Poetry. I also read Dave Malone’s Under the Sycamore: Poems and Tania Runyan’s A Thousand Vessels: Poems and will be posting reviews of both, also at TweetSpeak.

Other reading has included Work Matters by Tom Nelson and Amongst My Enemies by William Brown.

I also finished a novel that I didn’t think I would finish. It had been recommended by a friend, who knows the author. It’s a kind of Generation Y novel, or at least the characters are Gen Y. I struggled with reading it and almost stopped at several points. One character kept me engaged – which, I suppose, demonstrates the power of characterization. But the novel needed an editor; it needed better plot development, for one thing. I suspect the original ending was cut off for length purposes – you never find out what happens to the villain.

We saw the George Clooney movie, “The Descendants,” on Wednesday and “The Muppet Movie” last night. I really like “The Descendants,” but all of the characters, including the children, were required to drop the f-bomb at least five times each (scriptwriters should be able to do better than that). “The Muppet Movie” was nostalgic fun. We were young marrieds when “The Muppet Show” started its television run, and we loved both Muppet movies in the 1980s. This one had basically the same script as the others, and even a reprise of the song “The Rainbow Connection,” but it was still fun.

We still hope to see "The War Horse" and the new Sherlock Holmes movie. Have you seen any good movies during the holidays?
Posted by Glynn at 8:08 AM

And no. - not one movie yet this holiday season!

We have seen Sherlock - good, but not as good as the first one; War Horse - some powerful images and characters, but too long by about 30 minutes and a bit overplayed at points; The Descendants - which we ended up liking a lot (we've spent a lot of time on Kauai and LOVED the photography of that part of the world), but you're absolutely right about the language, though it did seem to get better as the picture progressed. Felt like they wanted to shock the audience into seeing how dysfunctional this family was at the start.... The one we LOVED was Hugo - just gorgeous in every way - great story, great photography, great actors, lovely tribute to a mostly forgotten movie pioneer. Highly recommend that one.

I'm pondering a review of your wonderful novel - my time is not my own these days, but soon, I hope. Just adored the book. And it would make a great movie, too. :>) (SO glad there is a sequel in the works.)

Cj and i saw "war horse" recently, and we both enjoyed it, though cj said it was a little corny.

I have been told that Hugo is good. I might see that one.