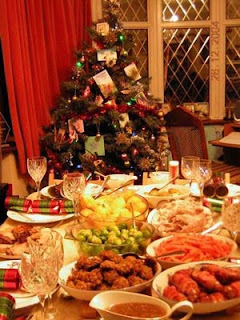 For years when I was growing up in New Orleans, part of the wonder of Thanksgiving and Christmas were the family dinners – and they were always held at our house. The simple reason for that was that we had a family room that had started out life as a carport and porch – and once it had been enclosed, it became the largest room in my mother’s extended family, the one that could accommodate a sit-down dinner for 25 or more people.

My parents would rent or borrow tables, arrange them to look like one long table (covered with tablecloths), with usually the table in the adjacent kitchen used for the kids. My parents made the entire meal – everything from the turkey (Thanksgiving) or ham (Christmas) to the desserts. And the holiday meals were the two times of the year my mother used her good china and silver.

My father made the turkey and the oyster dressing, which everyone in the family except me ate with great gusto. I refused to eat it, likely because I was never a major fan of oysters (a felony in New Orleans). My mother would make mashed potatoes and other vegetables and the pies, which were always pecan pie and mince-meat pie. The mince-meat pie was for me – it was and still is my favorite. I would watch to make sure none of the relatives took too much of the mince-meat pie, especially the last piece.

The gatherings were loud and noisy. Three of my mother’s four sisters came with their husbands and children; the fourth sister had six children and generally went to the in-laws for holiday meals. My grandmother would arrive with one of the aunts. There was lots of hugging and kissing and usually a considerable amount of alcohol consumption. Much of the alcohol was left over from holiday parties at my father’s office.

The number of children was relatively small for the gathering – only six of us. Two were too old to “play: with the rest and one (my little brother) was too young, so it was left to me and two cousins to invent things to do. Usually that meant disappearing for a time and going to the woods across the street from my house. My cousins lived in the city and the closest thing to woods was City Park or Audubon Park, which were (and are) wonderful spaces but not quite the same thing as woods with trails, vine swings and the likelihood of running into Mr. Snake, which was both an enticement and a fear.

When it was time to eat, usually around 2 p.m., we would gather for a prayer (which I seem to remember my father always praying) and then consume mountains of food. The adults always had wine with dinner, some vintage of kosher Mogen David wine. I don’t know why it was always Mogen David, but I think it had to do with the brand being a step up from the more common ones but still cheap enough to buy for a lot of people who enjoyed wine with their dinner.

After the meal, some of the adults would look for a bed to sleep off too much Mogen David. The conversation would go on as the clean-up got underway. The kids would usually go nosing around for another piece of pie (and me to check on the status of the mince meat) and then we’d be outside playing games, running around, doing normal kid stuff.

These holiday celebrations continued well into my teen years. At some point they stopped; my parents may have tired of the hosting duties.

But they were special, special because of family, a large family, coming together to celebrate and doing the things large families liked to do. My wife remembers similar family celebrations at her grandparents’ home in Shreveport – similar except for the Mogen David. You didn’t have wine at holiday dinners in Shreveport. Consequently, things were more subdued than in New Orleans.

Today I look around at my own family at holiday meals in St. Louis. We are definitely a smaller and quieter crowd, and the wine is better. Yet I’m still reminded of Aunt Tean and Uncle Chester, Aunt Toot and Uncle John, Aunt Gee and Uncle Sonny, my grandmother Lillian, and June and Lee and Jimmy and Donna and Susie and Alvin and sometimes someone’s in-laws and out-of-town visitors, and the laughter and the jokes and running in the woods.

And that mince-meat pie sitting with the other pies on the card table in the corner.

Over at Faith Barista, Bonnie Gray is celebrating the month of December with a blog carnival on “Unwrapping Jesus.” Family memories are one way I do that unwrapping. To see other posts, please visit Faith Barista.
Posted by Glynn at 5:47 AM

I remember this scene from my childhood, except we were Baptists so there was definitely no Mogen David! My cousins and I escaped to the woods behind my grandpa's barn. I'm glad you wrote about this because I think these kinds of extended family gatherings are far less common. It's good to have the memories recorded (except maybe for the mincemeat pie--I never did understand that!)

I'm your opposite: I enjoy oysters and won't touch mince meat.

A lovely remembrance of Christmas past.

Lovely memories. I had to smile at the Mogen David wine, my mom always loved it but I didn't know why. It always tasted too sweet to me. Thank you for sharing, Glynn.

What a charming picture of a lively group, being a family on Thanksgiving. I covet that big long room your parents had!

And I must ask: what would you DO if you discovered the mincemeat supply was threatened?

I grew up in a compact family. Mom had one sister. Dad had one brother. I had a grand total of 5 first cousins. The big noisy family gathering isn't a memory from my childhood, but it's one we're creating now.

My grandfather only bought wine once a year ... at Christmas ... and it was Mogen David.

Thanks for the memory.

So.... is that laden table from your home? Can I come for dinner, please?

Lovely post Glynn filled with memories -- so much better when shared.

nice memories man...one thing i miss is the dinners at my granparents...all the family around...all the cousins...the fire, a big tree...no one could touch presents until the dishes were done from christmas dinner...

Kept me smiling, thinking, enjoying. Thanks.

But I am always a sucker for these pieces of yours.

Not the pie though -- we always had pumpkin, and I didn't like it till I was an adult...