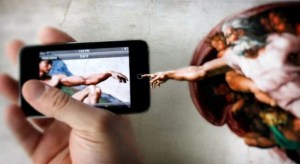 For a large part of my career, I was a corporate speechwriter. A word guy. I would often eat, drink, and sleep the printed word. People who knew me as a child weren’t surprised to learn that I end up making a living with words. I was the family reader. I loved books. There was never a time when I didn’t have too many books.

I was not quite 33 when I got my first desktop computer at work – an IBM 384. I was fascinated as the IT guy set it up, and he was so amused by my interest that he showed me (and no one else in our department) how to type in the command for it to play music that was programmed into it.

Email began arriving in the early 1990s, and by 1993 our company had hit critical mass with the number of people with access. I started an email newsletter on company news – simple text, no images or graphics. Within three weeks, the newsletter had gone viral, saturating the entire system and even being sent by sales people and researchers to customers and academic partners outside the company.

Form there, I graduated to programming a “magazine” on a disk and then to leading the project to create the company’s first web site.

This sound so, well, rather ancient and quaint today, but then it was exciting, cutting edge stuff. Even Microsoft took note of what we had done with the company’s web site.

What I didn’t understand was why this was all so appealing to me, the printed word guy, the book guy. I was grappling with the implications of where this digital stuff was taking me (and the company), but I was genuinely puzzled by my attraction to it. That is, until I read a rather academic book called Orality and Literacy: The Technologizing of the Word  by Walter Ong.

Ong was a Jesuit priest teaching at St. Louis University (he has since died). Essentially, his argument was that the digital revolution was actually harking back to the oral culture replaced by Gutenberg and his printing press in the 1400s. Image and feeling (emotion) was becoming more important, propelled first by television and then by the computer and the internet. In fact, the digital world was a kind of “secondary orality.”

It all clicked into place. I was a speechwriter – writing in one medium (the printed page) for communication in another medium (speech) for understanding via a third medium (the ear and then the mind). I was also largely working in an “oral” field when the digital revolution and its “secondary orality” arrived.

It all made sense. What also made sense was that digital technology – like any other communication medium – is not “neutral.” We think it’s all about content, and we are dead wrong. Content is important, but the form the content is packaged in is also a communication vehicle, with its; own assumptions, priorities and biases.

All of this was brought to mind this week as I was reading The Next Story: Life and Faith After the Digital Explosion by Tim Challies. I bought the book about the same time I started The Discipline of Grace by Jerry Bridges, which Challies is leading a discussion of at his blog, Informing the Reforming.

In The Next Story, Challies provides an concise history of communication technology (the revolution really started with the railroad and the telegraph) as he leads up to an extended discussion on how all this affects our faith. He says that television, for example, “has taken us from a culture that learned from print, was entertained by print, was persuaded by print, and trusted print to a culture that now relies on the image. It has changed our perception of ourselves and our understanding of the world around us. Television represents more than flickering images on a screen. It gives us a new identity. A new ideology. A new idolatry.”

As Challies says, technology changes us. It’s no coincidence that the rise of television coincided with the rise of youth culture and the emphasis on youth. Television also emphasized the hear-and-now at the expense of history. We are very arrogant toward history these days, believing anything older than 15 minutes probably isn’t worth very much.

And why do people on Twitter say things they would never dream of saying in person? Because of the perception that Twitter and other social media are game changers, and can empower the so-called powerless. Social media can also be a form of tyranny.

I was going to review The Next Story and be done with it, but I may have two or three posts about it. What Challies has to say about the impact of technology on faith is important.