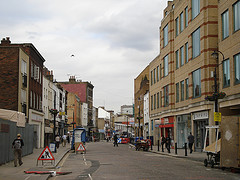 I step around the corner
from our rounded glass hotel
and its view of Westminster Bridge
(as painted by Monet)
and turn into Lower Marsh Street,
the name defining its birth,
to find a set for EastEnders:
the Camel & Artichoke pub,
the laundromat attendant and her
“three quid to wash and fold, luv,”
Iceland food mart, used bookstores,
two hardware shops within a block,
chop suey takeaway at the corner,
Two loads of laundry for six pounds.
No eel sandwiches, though. 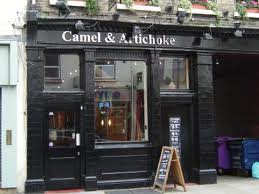 The area that is Lower Marsh Street in Lambeth (London) today is first mentioned in historical records in 1377 – as a marsh. It’s been a commercial area of small shops and restaurants since the mid-19th century and is an officially designated “conservation district” for its special character (a friend in London called it “quirky,” and she was right). It was indeed under around the corner from our hotel, that is, around the corner once you traveled under the railroad track overpass coming from Waterloo Station. The quote about the laundry was actually spoken when I needed to find a place to wash clothes.
Posted by Glynn at 5:00 AM

Really like the interjection of "three quid to wash and fold, luv".