I Am Halves, I Am Pieces

We’re reading Kim Addonizio’s Ordinary Genius: A Guide for the Poet Within over at TweetSpeak Poetry. We’re into Part 2, “Inner and Outer Worlds,” and the author has continued to come up with a whole array of exercises to stimulate thinking, inspiration and creativity.

One exercise she suggested, however, went a bit over the top. Encouraging the reader to rethink gender roles, she suggested that men apply makeup – or have someone apply it to them, and put on women’s clothes, to see what it felt like. And then write about the experience.

I noted various exercises that I could do (or be willing to do), and then came to the suggestion to “write about your relationship with your racial/cultural identity. When were you first aware of being Asian, Caucasian, Jewish, ‘different’ from other people? Did you grow up within a certain group, and/or as an outsider to other groups? See if you can recall a specific incident when you experienced your ‘otherness.’”

As significant as racial differences were, other differences were equally profound for me – religious ( I know what it is to be a religious minority amidst a religious majority), ethnic, and economic – and the difference between living in a region more akin to the Caribbean than to the United States yet growing up in a what was a very Americanized suburb.

Sometimes the differences and conflicts were so pointed that you didn’t feel “whole.” 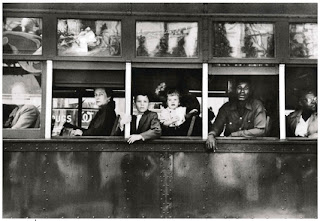 I Am Halves, I Am Pieces

To join in the discussion and see what our leader Lyla Lindquist is up to, take a look at today’s post at TweetSpeak Poetry.

Photograph: New Orleans Streetcar 1950 by Robert Frank.
Posted by Glynn at 7:30 AM

This was as brave subject to consider as gender re-thinking. The poem is about you and yet also stretches out to encompass so much more; it's a bigger poem for that, and I mean "bigger" in the sense of containing some universal truth about America. I think it also begs to be read aloud.