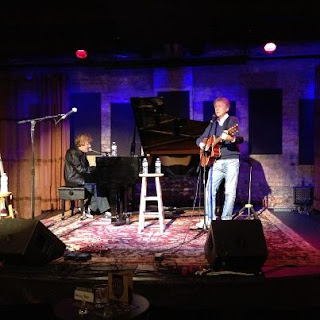 In the mid-1980s, my wife and I attended a concert at a night club on Laclede’s Landing, the oldest part of the city of St. Louis and adjacent to the Arch and downtown.  The concert was the return of the British Invasion, and featured many of the bands that had followed in the wake of the Beatles and the Rolling Stones in the 1960s. Those British bands collectively had an enormous impact on American music.

We heard several groups – Freddie and the Dreamers, Gerry and Pacemakers – and a duo named Chad and Jeremy, who were the real reason we were there. They were/are my wife’s favorite singing group. And Chad and Jeremy accomplished something at that concert that had never happened before in our married life, and only once or twice since.

We were on time for the concert. In fact, we were early. We were so early that we were first in line at the night club to get in.

Fast forward to 2008. A few days before Mother’s Day weekend, I was scheduled to speak at a conference in Chicago. The planets aligned, and my wife discovered that Chad and Jeremy would be in Chicago for three concerts that weekend – a Friday night house concert, a concert Saturday in Wilmette Auditorium, and a concert at Bill’s Blue Bars in Evanston on Sunday.

And this coming weekend, they’re back in St. Louis for a benefit concert for the Animal Protective Association of Missouri. Would you be surprised to know that my wife been involved in getting them here, finding a hotel for them to stay, is working with the APA, delivering promotional flyers all over town, and creating two posters for the venue on Saturday night and a banner currently hanging in front of the APA’s offices? Or that we will be having dinner with them while they’re here?

Why does my wife have this commitment and devotion? Because Chad and Jeremy’s music – songs like “Yesterday’s Gone” and “Summer Song” got her through a difficult adolescence and the change of the teen years. Their music also helped shape the young woman that I would meet in early 1973 and marry some nine months later.

I suppose I owe them a debt as well.

And if you listen to their music, I think you’ll find that yesterday isn’t gone. In fact, yesterday’s back – and may never have left.

Top photograph: Chad and Jeremy performing at Space in Evanston, Illinois, this month.
Posted by Glynn at 5:00 AM

Like your wife, I too loved Chad and Jeremy -- your wife is delightful!

And how wonderful to be organizing a concert to support a great cause and to have time to spend time wit icons!

very cool!
(and what Louise said)

I'll give this post a Glynnie for bringing back some fond memories.

The problem is I don't wanna be old enough to have these memories!

Glynn-wow...who knew Chad and Jeremy were still around? (your wife, obviously.) Their music does take me back....good things just L A S T.
Thanks for sharing this.