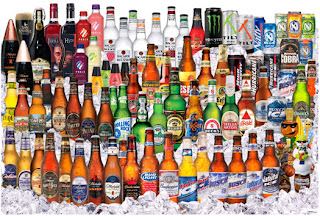 Astride the gates of Archtown
sits the behemoth of beer,
accepting its homage of praise
by the name we know it here:
The Brewery.

It offer us a choice to drink,
versions and colors and taste;
we accept our can or bottle,
taking care not a drop to waste.
The Brewery.

I am a vassal of ArchTown,
I who enjoy beer the least.
I bike past blocks of brewing,
inhaling the smell of the yeast.
The Brewery.

TweetSpeak Poetry is celebrating Oktoberfest with a series of poetry prompts about wine and beer. This week, Seth Haines has asked for a poem about the beer that is known or enjoyed locally or regionally. If you live in St. Louis, that means one thing: The Brewery (although there is a small brewery here, too, the exception proving the rule: Schlafly). Check TweetSpeak Poetry to see what other regional beer poems have been submitted.

This poem is also submitted for Open Link Night at dVerse Poets. To see other poems submitted, please visit the site. The links will be live at 2 p.m. Central time today.
Posted by Glynn at 5:00 AM

I've never thought Stella Artois sounded like much of a beer name. According to its own hype, it's poured only into chalices, not glasses.

It's interesting to me, too, that the microbreweries, like Richmond's Legends, is increasingly being offered elsewhere. It started out in a very small space and now the deck alone at its pub seats 200.

i like a good stout on occassion...and those breweries def carry a scent to them...i dont mind the smell of beer though...at least not there...not as much as mornings in college...but that was more than an occassion...

... living near Milwaukee beer is a big thing around here... never cared for the taste or smell

You took me to the vats, the brewhouse and let me inhale the air laden with scent and spores. Great imagery, to say the least.

I'm not much of a beer drinker either. Several microbreweries in our neck of the woods. Husband's summer favorite--OpaOpa watermelon ale. A tolerable smell on that one! Enjoyed your clever play on words, makes the thought of having a beer almost palatable! Thanks for sharing!