A Legend in Iran: The Poems of Shamseddin Hafez 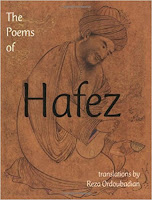 Hafez was born between 1310 and 1325 in the city of Shiraz. His real name was Shamseddin Mohammed, but he used “Hafez” as his pen name and it is by Hafez he is known today. We know certain basic facts about him. He was married and had one child. He was often involved in political intrigue and upheavals at court; his fortunes ebbed and flowed with changes in rulers. He taught Koranic studies, and he’s said to have memorized the Koran as a boy listening to his father’s daily recitations. He died in 1388 and was buried in Shiraz; his tomb is still a major site for tourism and pilgrimage.

He wrote poetry in primarily one form – the ghazal, rhyming couplets with a refrain. Translating a Persian ghazal into an English ghazal presents numerous literary challenges, writes Reza Ordoubadian, the translator of the 2006 edition I read, The Poems of Hafez.

To continue reading, please see my post today at TweetspeakPoetry.

Top photograph: The tomb of Hafez in Shiraz, Iran.
Posted by Glynn at 5:00 AM

The link to Tweetspeak Poetry didn't seem to work.

Thanks, Susan. I fixed it.