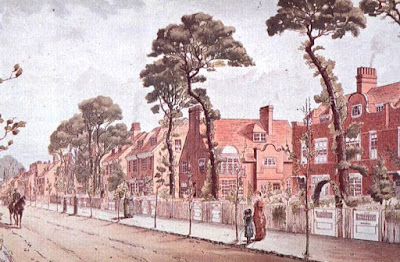 Bedford Park in west London was the world’s first garden suburb. A planned community, its residents included poet William Butler Yeats, the painter Camille Pissarro, and many other actors, writers and artists.

Bedford Park is also the title of a 2013 novel by Bryan Appleyard, set mostly in the garden suburb. It is largely the story of Calhoun Kitt, a wealthy Chicagoan who leaves America and settles in London. Kitt tells the story of Bedford Park and its residents, and the larger story of London. And that story involves a rather gruesome murder, artistic people who seem to float from salon to fete and back to salon, and Kitt’s own inability to create a life for himself, instead simply responding to what s most forceful at the moment. 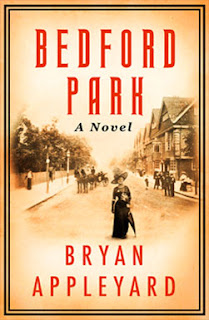 The cast of characters include both fictitious and actual people. Kitt is an invention, his name taken from a story by G. K. Chesterton. But Yeats and his muse Maud Gonne, Ezra Pound, Oscar Wilde, Ford Madox Ford, Joseph Conrad, and the notorious Frank Harris were all very real people.

Kitt, the narrator and central figure of the story, wears dove gray suits at a time when men of fashion wear black. The color is symbolic – neither black nor white – and it captures Kitt’s general indecisiveness in matters of work and career, love, and even his friends. When a local Bedford Park resident, Brian Binks, is murdered and his body left on the area’s Acton Green, Kitt looks into it, but not too strenuously. Life for these favored people continues as if uninterrupted. Kitt will learn the identity of the murderer years later.

The Bedford Park residents enjoy their get-togethers and their planned activities. They dapple in spiritualism, popular at the time. They live very sheltered, very privileged lives, and very little is allowed to interfere with that privilege.

Bedford Park is a story of the late Victorian and Edwardian period, and yet it could be the story of any privileged group living at any time. I had the odd sense throughout reading the novel that I could easily be reading about an artistically-inclined group in contemporary New York, Los Angeles, or even Washington, D.C.

Author Bryan Appleyard was graduated from Cambridge University with a degree in English. From 1976 to 1984, he served as financial news editor and deputy arts editor at The Times of London. Since then, he’s been a freelance writer, author, and journalist, and been named Feature Writer of the Year three times and Interviewer of the Year at the British Press Awards.

He is currently a writer, commentator, reviewer, and columnist for The Sunday Times, and also writes for the New Statesman and Vanity Fair. He’s also written for many other publications, including The New York Times, The Spectator, The Daily Telegraph, and The Times Literary Review, among others. Appleyard is also the author of The Brain is Wider than the Sky: Why Simple Solutions Don’t Work in a Complex World (2012).

Bedford Park is well written, and an interesting take on well-known literary and artistic people. But what the reader is left with is the emptiness of the lives of people who enjoy their renown and privileges, fully believing they deserve them.


Top illustration: Bedford Park in London in the late 19th century.
Posted by Glynn at 5:00 AM