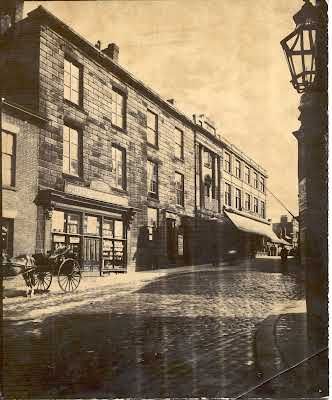 Israel Zangwill (1864-1926) was an author, playwright, teacher, journalist, and champion of cultural Zionism. H was born in London, the son of Jewish emigrants from what was then the Russian Empire and is now Latvia and Poland. He attended the Jews’ Free School in Spitalfields in east London and eventually graduated from the University of London with a B.A. degree (triple honours). Much of his writing was about the Jewish community in London, and he earned the nickname “the Dickens of the ghetto.”

Among his other recognitions, the phrase “the melting pot” came from his play (1909) of the same name and was especially popular in the United States. Theodore Roosevelt loved the play and wrote Zangwill a fan letter.

He also has the distinction in mystery writing circles of having written the first locked room mystery, The Big Bow Mystery, first published in 1891 and never out of print. The reader sees the influence from the first page, with the opening description of a December fog and the introduction of a landlady with the Dickensian name of Mrs. Drabdump, who operates a boarding house on Glover Street in the Bow Street area of near northeast London. One morning she oversleeps, an unusual occurrence for her, and races to wake one pf her lodgers, Arthur Constant, who had asked to be awakened early for an appointment.

When he doesn’t respond to her repeated poundings on the door, she fears the worst. She has her neighbor across the street, a retired Scotland Yard detective named George Grodman, break down the door. They find Mr. Constant in bed – with his throat slit. The windows are locked, and the door had been locked and bolted from the inside. And the death was not suicide, since no trace of a weapon can be found. It is indeed a locked room mystery.

The murder becomes sensational news in late Victorian London, and here we see Zangwill not only telling a mystery story with overtones of Dickens but also producing something of a parody of the era and the city. And it is a story laced with (Victorian) humor throughout.

The Big Bow Mystery was written in two weeks for serialization in a London newspaper, and the fascination with the mystery story by the newspaper’s reader led Zangwill to incorporate readers and their letters suggesting solutions into the story itself. Obviously, Zangwill was having a good time.

It remains a classic, the first of the locked-room sub-genre stories with a human murderer (Edgar Allen Poe’s The Murders in the Rue Morgue inspired the locked room mysteries but his story wasn’t set in a locked room, only one from which a human couldn’t enter or leave). And it is still great fun to read.