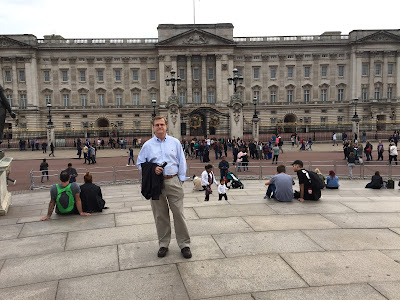 It’s likely the most recognizable royal residence in the world.

The site of Buckingham Palace in London has been a royal residence since 1761, when George III bought Buckingham House for his wife, Queen Caroline. It was architect John Nash who transformed the building into more of what we know today, creating a three-winged building with the Marble Arch in front of it (the arch was later moved to Hyde Park). Victoria was the first monarch to live in the palace, moving in in 1837, and it was during her early reign that a fourth wing was added, especially to provide more bedrooms and a nursery. The fourth wing created the quadrangle design.


The palace has experienced some significant changes over the years. In 1911, the forecourt was added (where the changing of the Guard takes place) as part of the plan for the Victoria Memorial statue. The gates and railings were also added at this time. In 1913, the palace was refaced – the stone was deteriorating because of air pollution. During World War II, a German plane flew right up The Mall and bombed part of the palace – in the area where the Queen’s Art Gallery and the palace gift shop are today on Buckingham Gate.

Photograph: Buckingham Palace, September 2017.
Posted by Glynn at 9:00 AM