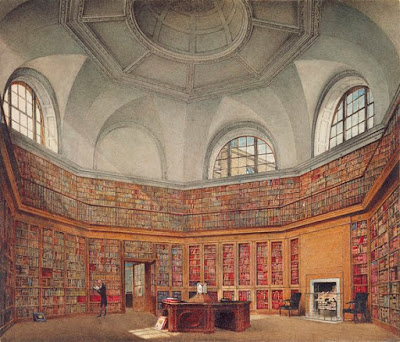 Several short scenes in Dancing King are set in what’s called the Buckingham Palace Library. Michael Kent-Hughes meets here with Josh Gittings , the man who becomes his chief of staff, the Monday after the family’s arrival in London. He tells Gittings that the volumes in the room are dusty, and he wished he had an inventory of what was in the room. Michael conducts interviews here, most notably the one with Geoffrey Venneman, one of the chief villains of the novel. Michael is using the library as a quasi-office until his own office is remodeled.

I should mention here that there is no official “royal library” in Buckingham Palace. I invented the room for the novel.


At the rear of the ground level of the palace, there is the Bow Room, a large room that arcs on the terrace side. On the official tour, you walk through this room to exit to turn in your tour head sets and find the refreshment tent. The Bow Room is officially a kind of waiting room for guests, until they’re conducted to meet with the monarch. There are rooms on either side of the Bow Room, which were originally designed to be the library. From early on, though, Victoria and Albert, the first to occupy the palace, used the two rooms and the Bow Room for other purposes.