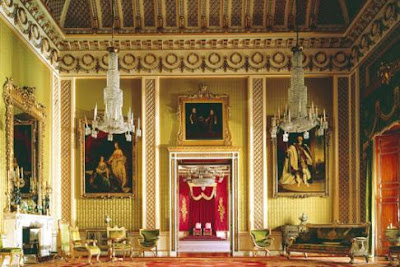 Before there was a Buckingham Palace, there was a Buckingham House, built by the Duke of Buckingham in the early 18th century. George III bought it in 1761 as a residence for his wife, Queen Charlotte, and it became known as the Queen’s House. The royal family spent considerable and increasing time there, and it came to be known as the family’s London residence. The Green Drawing Room, known by that name today (or simply the “Green Room”), was originally the Duchess of Buckingham’s saloon, and was the largest room on the first floor (what Americans call the second floor) of the house.


Over the centuries, the room has been remade a number of times. For Queen Charlotte, large wall drawings were brought from Hampton Court Palace and the ceiling was painted. Later, the drawings were replaced, and the ceiling plastered. Doorways have been added and chimney mantles replaced. In the 1830s, green silk was used to decorate the walls.

Photograph: Looking through the Green Drawing Room to the Throne Room at Buckingham Palace.
Posted by Glynn at 9:00 AM