"Adjustments" by Will Willingham 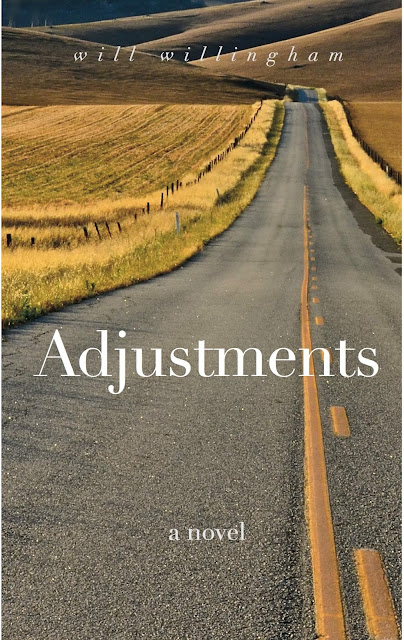 Will Phillips is an insurance adjustor, working in the plains, hills, and valleys of South Dakota. He lives in a room of what was once a mansion but is now more of a boarding house. He has a give-and-take relationship with his 70+ landlady, Pearl Jenkins, who is part friend, part mother, part judge, part advisor, and full-time matchmaker who usually cheats at cards. So far, Will has resisted the matchmaking and gone along with the card cheating.

Will’s work, like most work, involves a daily sameness. After a few years, insurance claims become similar. A fire is a fire, and Will can usually sniff out when it was accidental and when it isn’t. Same thing for a stolen truck; even doctors are known to report a truck stolen when it’s time for a replacement. Will investigates a fire claim; the house is owned by a man unmarried to the woman and her children living with him. Will knows how this will end – the house will be replaced or rebuilt, the man will get a new girlfriend, and the woman will find herself and her kids homeless.

It says something about Will that, even as he sees the sameness, it doesn’t numb him to people’s anguish and pain. It may be that Will is still dealing with his own, even as he masks it from himself. That mask begins to fall when he investigates a claim by Joe Murphy, a 73-year-old widower originally from Chicago. Joe and his wife had moved to the area when Joe retired from the fire department in Chicago; his wife had grown up in the area and wanted to go back. After her death, he stayed, and Joe senses something in Will that needs to be reached. Hoe begins to try to reach whatever it is in Will through literature and music.

Landlady Pearl already knows this about Will, too; it’s why she keeps at her matchmaking. Her latest project to match Will to the new woman in town Cameron Julian, who’s moved in across the street. Will, however, keeps slipping away from everyone’s grasp, or trying to. He’s still bearing the scars, figurative and literal, from a woman from long ago. It’s why he left Chicago, where he grew up, and moved to South Dakota. It’s why he resists relationships. Will has trapped himself in his past.

Adjustments by Will Willingham is the story of Will Phillips. It is filled with humor and poignancy, insight and emotion. The reader sees into the soul of an inherently decent man who knows he’s broken and has found a way to live with that, until he can’t.

The novel has wonderfully memorable characters. Pearl Jenkins is an original that’s immediately recognizable; some of the funniest moments in the book revolve around her. Joe Murphy is a wise, literate uncle; he reminds me so much of the uncle who introduced me to writers like James Michener that I almost thought the author must have known my uncle, too. Even the unseen but fully experienced presence of Barbara Roberts, the reason Will left Chicago, is drawn so well that she’s familiar, too; many of us have had a Barbara Roberts in our lives.

This is the author’s first novel, and it’s a profoundly beautiful one. Willingham is an editor at Tweetspeak Poetry, and so it’s no surprise to find discussions about poets and poems like “Endymion” by John Keats and fairy tales like the wild swans in the novel. Even the name of Cameron Julian is a likely tribute to Julia Cameron, whose book The Artist’s Wayhas been featured at Tweetspeak. Willingham is also an insurance adjustor and lives many of the stories that Will Phillips can tell.

Adjustments is more than a good novel; it is a fine novel. It is, simultaneously, moving and real and surprising and true. We see ourselves and our personal histories in Will Phillips, Joe Murphy, and Pearl Jenkins. Like Will, we bear scars. In Joe, Pearl, and Cameron, we experience offered hope. This is a story about what matters, and it’s told beautifully well.

Related: Interview with Will Willingham, Author of Adjustments, at New in Books.

And I agree about it being a fine novel. Part of that fineness is its many-layered quality. And the language along the way. Every sentence sings.

I'll share this on some of my adjuster pages.

"Will has trapped himself in his past."

I'm still reading, but I've been thinking a lot about the dust and shedding dog hair as metaphors for a dusty past and the need to shed masks. I don't know if Will meant that or not. This is a great review, and the book is.... well.... luminous. Also, it's sending my emotions on a rollercoaster.