Armistice Day, “Poppy Field” by Michael Morpurgo, and the Poppies at the Tower 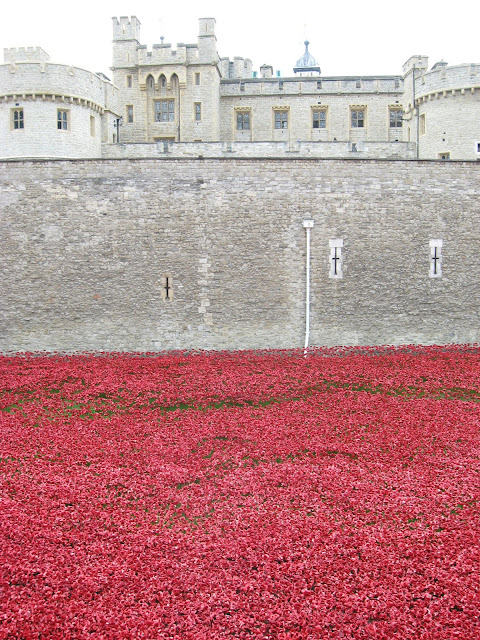 Today is Armistice Day. How do you make sense to children (and possibly adults) about a war that happened a hundred years ago? You might focus on a symbol, like British author Michael Morpurgo did with the poppy.

Morpurgo’s Poppy Field is the story about a contemporary boy, Martens Merkel, who lives on a farm with his mother and grandfather in the Flanders region of Belgium. In World War I, the farm was part of the site where the three battles of Ypres occurred. In a very real sense, the battles and the war are still going on; Martens father was killed a few months after the boy was born when his tractor uncovered a live shell from the war.

The family has a framed fragment of a poem, something that serves as a talisman of sorts for the family. The grandfather’s grandmother, as a little girl, got it from one of the soldiers with the British Army. She was selling eggs and giving away poppies that grew in the family’s fields, and he has crumpled the paper and thrown it away. He told her she could keep it.

The poem turns out to be an early draft the most famous poem of World War I, written by Canadian surgeon John McCrae after the death of his best friend. 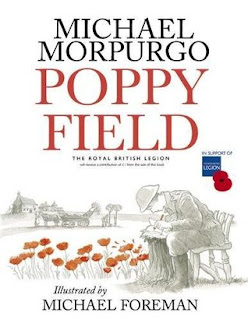 In Flanders Fields
In Flanders fields the poppies blow
Between the crosses, row on row,
That mark our place; and in the sky
The larks, still bravely singing, fly
Scarce heard amid the guns below.

We are the Dead. Short days ago
We lived, felt dawn, saw sunset glow,
Loved and were loved, and now we lie
In Flanders fields.

Take up our quarrel with the foe:
To you from failing hands we throw
The torch; be yours to hold it high.
If ye break faith with us who die
We shall not sleep, though poppies grow
In Flanders fields.

The grandfather tells the story of the poem and his grandmother, and how the story continued to play through the family and the next world war. And he talks about the poppies.

Morpurgo’s moving story is beautifully illustrated by Michael Foreman, a noted British illustrator of children’s stories. The book includes an afterword by the Rev. Nigel McCulloch, former national chaplain of the Royal British Legion and bishop of Manchester. It was through the efforts of an American woman, Moina Michael, that the American Legion came to adopt the poppy as a symbol of remembrance. A French woman, Anna Guerin, inspired by Michael, convinced several governments and the Royal British Legion to adopt the flower.

Morpurgo is one of Great Britain’s best-known and best-loved children’s writers. He’s written some 130 children’s books and won numerous prizes and recognitions. In 2018, he received a knighthood for his services to literature and charity. He’s also the author of the successful stage play War Horse. Michael Foreman has had solo exhibitions in London, Paris, New York, Japan, and Chile, and most recently at the National Centre for Children’s Books, Newcastle, England. He’s won numerous awards for both his writing and illustrations, and has received the Kate Greenaway Medaltwice for outstanding illustration in a book for children. 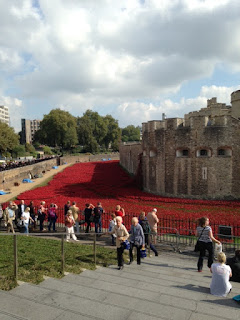 Remembrance Day, as Armistice Day is called in Britain, is a much larger celebration than it is in America. For the centenary anniversary of the war, artist Paul Cummins and designer Tom Piper created an exhibition at the Tower of London, entitled “Blood Swept Lands and Seas of Red” that filled the tower’s moat with 888,246 ceramic poppies, one for each casualty of World War I from Britain and the Dominion countries.

We saw it in September 2014, as it was still be assembled. I’m not sure what was more moving: the sight of the installation itself or the profound silence of the large crowds gathered to view it.

The Imperial War Museum has published Poppies: Blood Swept Lands and Seas of Red, a commemoration of the Tower of London installation and the 19 different locations to which parts of the installation traveled in Britain through 2018. Most of the ceramic poppies at the Tower were sold to individuals to raise funds for various charities, and some nine million pounds was realized (we have one of the ceramic poppies in our home), Two parts of the installation, “Weeping Window” and “Wave,” traveled to various cathedrals, museums, public buildings, and even a pier. 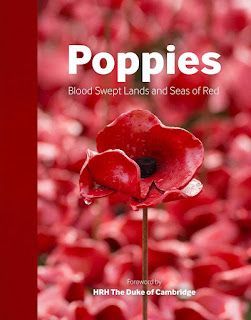 The book chronicles the original installation at the Tower and the installations at the 19 sites in England, Wales, Scotland, and Northern Ireland. There’s a text for each location and numerous photographs. To read the texts and see the photos is to experience that Tower of London installation all over again.

The Most Famous Poem of World War I.

Top photograph: A partial view of the poppies installation at the Tower of London in 2014).
Posted by Glynn at 5:00 AM

The selection of locations for the ceramic poppies was marvelous, their effect, even when only seen in images, dramatic and moving.