We miss her eyes 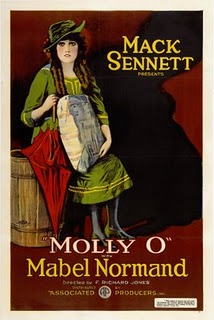 We still know Chaplin,
we still know Pickford,
we still know Keaton and
the Keystone Cops.
But she was a star, she was,
she had them laughing, she did,
her name pulled them, it did, a magnet
of relief, no matter how short,
to escape the war,
to slip past the flu,
to forget for a single moment,
to enter the magic of laughter
and oblivion.
She paid her dues, she did,
she paid big, she did,
too close to scandal,
too close to the needle,
too close to the flame that
burns as it shines.
We miss her hands, we do,
hands that spoke before sound was.
We miss her eyes, we do,
eyes full of knowledge,
eyes full of pretense,
responding to the camera’s call. 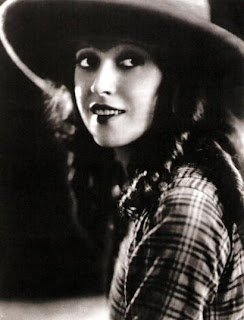 The poem is submitted to today’s prompt at dVerse Poets, which is all about the Silent Film Era. To see more poems (and some cool videos and photos), please visit dVerse Poets.

The subject of this poem is Mabel Normand, one of the most famous silent stars of the era. She appeared in Mack Sennett comedies; she appeared with the Keystone Cops. She was as much a household name as Charlie Chaplin and Mary Pickford.

She was involved with Sennett until she discovered his unfaithfulness; she was associated with Roscoe “Fatty” Arbuckle but managed to avoid the scandal that engulfed him and became a celebrated trial. She was close to the director William Desmond Taylor, who was murdered by persons or persons unknown; Normand was the last person who saw him alive. The publicity would have been sufficient to derail her career except that another star, Norma Talmadge, made a public show of supporting her. What finally closed her career was a shooting involving her chauffeur. She died of tuberculosis in 1938.

If you’re a fan of old movies, you may know of her connection to “Sunset Boulevard,” the Billy Wilder film released in 1951 and starring Gloria Swanson and William Holden. Billy Wilder named the character played by Gloria Swanson, an aging silent film star, Norma Desmond – combining the names of Mabel Normand and William Desmond Taylor.

The first book I reviewed for publication in a daily newspaper was The Man Who Died Twice by Samuel Peeples, published in 1976, a fictional account of the murder of William Desmond Taylor. In 1986, Sidney Kirkpatrick published A Cast of Killers, the story of the Taylor murder (and cover-up) based upon previously unknown and extensive research into the killing by the Hollywood director, King Vidor.
Posted by Glynn at 3:37 PM

I liked this, I did.

I can't help but hear these words with a musical background.

I saw a production of the musical "Sunset Boulevard" this past spring. It's full of pathos and even bathos. There are scenes of the Desmond character that are rather unforgettable.

Excellent commentary to go with your poem. Your choice of subject is great.

Thanks for posting this. I like the biography too.

So glad you posted this and included the detailed notes. So often, a spark that should be kept burning fizzles until someone rekindles it. Very much enjoyed.

The Zen of Gavin said...

Maureen I so agree with you I was singing this the whole way through.

Rhythmic and mysterious... thanks for the added bit of information at the end.

Complete and perfect post. I enjoyed the poem that was the prelude to a true life story and mysteries. I absorbed the era and the nostalgia. Thank you and I will wiki for more.

Thanks for sharing her life story with us...The refraining lines were effective in driving home her charm.

Thank you, I enjoyed this learning experience!

There really IS something about the eyes of silent movie stars! They are so much bigger than life! I like your poem.

awesome to read some more juicy bits on another silent film legend. They aren't so different from today's actors, are they?

And I totally forgot about the Keystone Cops. Wow! Thanks, Glynn.

We forget our modern players don't have the patent on scandal, wild living and tragedy--what is it about the entertainment industry that makes it such a fruitful ground for this stuff--seeling fantasy makes you want to live it? Really enjoyed your poem--you brought both her and the times to life. Thanks also for the additional commentary.

Very interesting read. She does seem to have led a very 'colourful' life and been involved in several strange events.
Oddly enough, I just read another article earlier to night about that incident/scandle with Fatty Arbuckle and an actress a party who later that week, died.
A great read, thank you.

Wow, her life was more dramatic than any of her films. Thanks for this bit of history and a good poem too.

"to enter the magic of laughter
and oblivion" ... I'm in the mood to have that spell cast on me. Maybe tomorrow, when I'm no longer high on cold medicine and delirium.

I liked the Irish tone of this poem, 'she did, she did', but what a tragic life it seems she had! A beautiful piece of work Glynn, your gift always shines.

sorry i am late...been at work all day and just getting in...this is a really fine tribute glynn...def lyrical...and how many its seems fly too close to the flame...and we miss them...yes we do...

Well, I'm excited. We recorded "Sunset Blvd" this evening as it was featured on TCM's Essentials...had to defer to the Boise State/Georgia football game! I'm sad to hear of her tragic life. I like how you used repetition to give the poem a unique voice.

Thank you for sharing all the backstory with us. It's always nice to learn something new. This was beautiful as she was beautiful. Some favorite lines,

"too close to the flame that
burns as it shines."

Marvelous write! What a fascinating life she led.

Good reminder of the fickle nature of fame.

I am really luvin' this topic. Learniing a lot. Great photo of this woman and great discription. You too sent me to google. Very accurate and lovely poetic presentation.

Silent films were cathedrals for the eyes -- the rapt audience staring wide-eyed a the screen, and the screen stars staring back with those luminous, silent pools of soul. The dialogue frames were incidental; the eyes, everything. I'm reminded of ancient statuary of Sirens who were marked by the big, owlish eyes, as if they could stare deep into one's soul and steal something there; as if they could see the insides of things we couldn't, or wouldn't. I used to review books for the daily paper in Orlando -- different rhetorical exercise, trimming 500 thousand words down to a proper 500. Poetry's compressions had to work there, too. - Brendan

My son and I did an American Film History course when he was in high school. It was fascinating -- seeing how our culture was reflected in film and how our heroes changed over the decades.

Thank you for this delightful poem and informative commentary. Her eyes were lovely, as is your poetic tribute.

Glynn, not being a fan of the silent era, I found this post most fascinating! I don't have much to reference, as my knowledge of the subject is quite limited...but I have been most intrigued by your post, and will learn even more. Thought the write was, as always, wonderful and I especially appreciated the commentary.

My mother used to speak of those silent films ... now I understand their methods better.

Hi Glynn- I chose you for The Versatile Blogger award. Congrats! You can receive the award here Hope Faith & Life. I also wrote a description as to why I chose you. Not sure if you post awards, but you received one : )

Your poem truly captivated me. I love your use of affirmations at the end of some sentences, I do.

Thank you for the information about Mabel Normand, and the assorted (and sordid) pieces of trivia also. I did not know much about her. Absolutely fascinating.