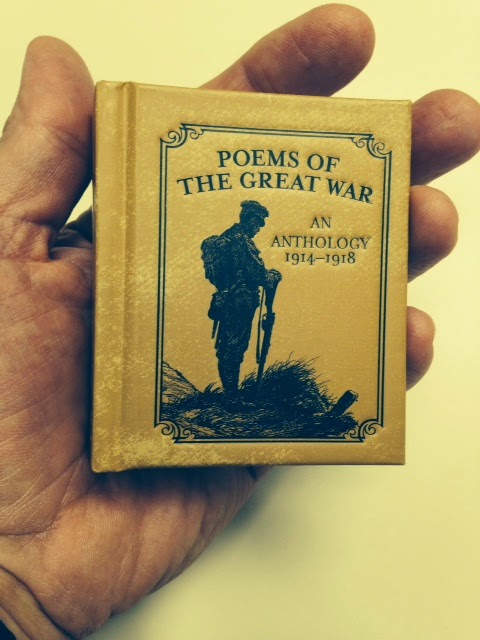 This year is the centennial (or centenary, as the British say) of the beginning of World War I, the group collectively known as the World War I poets has been receiving some well-deserved attention. In fact, the war itself has been receiving enormous attention, from the art installation of almost 900,000 ceramic red poppies at the Tower of London to an outstanding exhibition at the Imperial War Museum.


The poets wrote about the war in a way no one else really could. Some of them died on the battlefield, others died from illnesses like pneumonia, and still others survived to go on with literary and publishing careers. They capture our collective imagination for their youth, their hopes, and their experiences, as much as for the words they wrote.


Many if not all of them are represented into two small collections of World War I poetry. One is so small it fits in the palm of my hand; the other is a beautiful little edition from The Collector’s Library.


The small volume (the one pictured in my hand in the photograph above) is Poems of the Great War by Christopher Navratil, published by Running Press Miniature Editions. Navratil includes a number of the most famous poems, noting that of the hundreds of thousands of poem published with the war, only a few hundred have endured.


One of those that have endured (and is included in the volume) is “When I’m Killed” by Robert Graves: 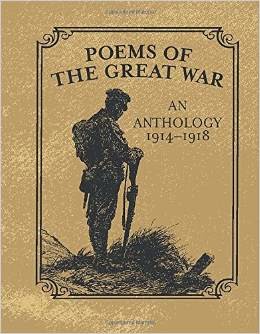 
(Graves survived the war, going on to write novels, essays, criticism, and much more.)


It is a small volume, but a somber one, providing a window into the tragedy that the allies called a victory.


Collector’s Library has published Poetry of the First World War, edited by Marcus Clapham, an editor, publisher and anthologist of more than a dozen volumes. I have a weakness for fine volumes with gilt edging. This edition has artist Paul Nash’s painting “The View of Passchendaele” for its cover illustration; the original is in the Imperial War Museum.


Beyond it’s physical beauty, the volume includes both well-known and lesser-known poems, and poems by a number of non-combatants like John Masefield, A.E. Housman and Thomas Hardy. I especially liked this one, “The Owl,” by Edward Thomas (who died in 1917): 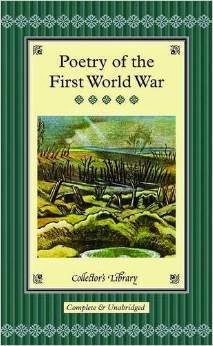 Downhill I came, hungry, and yet not starved;
Cold, yet had heat within me that was proof
Against the North wind; tired, yet so that rest
Had seemed the sweetest thing under a roof.


Then at the inn I had food, fire, and rest,
Knowing how hungry, cold, and tired was I.
All of the night was quite barred out except
An owl's cry, a most melancholy cry


Shaken out long and clear upon the hill,
No merry note, nor cause of merriment,
But one telling me plain what I escaped
And others could not, that night, as in I went.


And salted was my food, and my repose,
Salted and sobered, too, by the bird's voice
Speaking for all who lay under the stars,
Soldiers and poor, unable to rejoice.


I enjoyed reading both collections. Expect a quiet, reflective result.
Posted by Glynn at 5:00 AM

Love this. I have several old poetry collections that are filled with poems of war. Reflective results are right!