It was author Ed McBain who introduced to the mystery sub-genre of police procedurals, and if I didn’t read all of his more than 50 novels about the 87th Precinct cops, I came pretty close. He created an entire fictional world in these novels, based approximately on metropolitan New York City. McBain died at 78 in 2005, with a writing legacy stretching back to 1956. 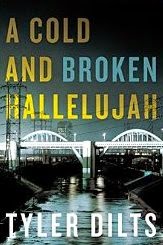 Since McBain’s death, I’ve read a few police procedurals, but little really grabbed my interest like McBain’s stories. That is, until I read Tyler Dilts’ A Cold and Broken Halellujah.


The novel is the third of the Long Beach Homicide stories written by Dilts, who teaches creative writing at California State University in Long Beach. The first two in the series were The King of Infinite Space (2010) and The Pain Scale (2012).


I’m hooked. And it wasn’t because the title comes from the Leonard Cohen song, or the completely unexpected mention of poet Luci Shaw by the main character.


No, it was because it’s a terrific story.


Long Beach police detective Danny Beckett and his partner Jennifer Tanaka are called to investigate what at first looks like a nauseatingly familiar street crime – a homeless man burned to death by three young thugs, one of those senseless acts that we seem to read more and more about in the newspaper.


As Beckett and Tanaka investigate what appears to be a slam-dunk case, they gradually discover that the crime isn’t what it appeared to be, and instead becomes something uglier and more sinister.


The story focuses on Beckett, whose usual companions of vodka and vicodin help dull the pain in his hand and arm (from the second novel in the series) as much as they dull the ache of the loss of his wife in an automobile accident years before. The fact that she burned to death makes this case of a burned homeless man more real, and more personal.


What highlights the story is how Dilts turns the city of Long Beach into almost a character in and of itself. The reader walks and drives the streets and neighborhoods with Beckett and Tanaka. And it’s done just right, so that the setting doesn’t overpower the story but instead is woven tightly into the story.


So, yes, I’m hooked. Now I have to read the first two. And I hope more to come.


Photograph: City of Long Beach at night.
Posted by Glynn at 5:00 AM

I agree completely! I am only a little familiar with Long Beach, but the way it's part of the stories is just right.

Another mystery series to read! Hooray. Just ordered all three.