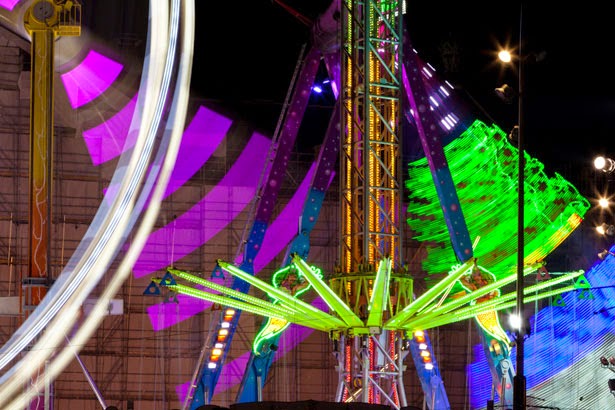 I work in an environment that requires – demands – an array of communications technologies, platforms, systems, and applications. My team is responsible for managing social media channels – Facebook, Twitter, YouTube, a blog, assorted web sites – for the organization. We’re part of a larger digital team that also manages all of the primary web properties.

We use smart phones, iPads, laptops. We’re supported by rather complex IT systems. And we use a number of online tools to help us manage volume and speed.

We go to seminars and conferences. We participate in webinars. We read everything we can get our hands on for trends in technology.

Experts rather cheerfully report that attention spans are getting shorter. For example, we’re told that few people want to watch videos longer than 15 seconds, and six to eight seconds is optimal.

Speed is exhilarating, for a time. Then it becomes exhausting, and then destructive.

Western culture in general seems to be moving to a six-to-right-seconds mentality. A “fast” culture isn’t just about the internet and Facebook. Everything accelerates, bowing before an insatiable demand for faster and faster.

We want to implement change – now!

The church offers no respite from the six-to-eight-second mentality. A lot of church wreckage litters the landscape, remnants of the battles of organization, size, growth, social issues, economic issues, justice issues, politics, and the worship wars.

As we hurtle down the ever-accelerating speed lane, we’re shedding important things. Time to pause and rest. Time to reflect. Time to think and consider. Time to understand the wholeness of what the church is supposed to be about.

We’re supposed to be the alternative to the world, not a corporate subsidiary of it.

At some point, many churches embraced a corporate model, likely influenced by all the corporate executives who ended up on elder boards. Those who did missed an important fact of corporate life: corporate cultures have downsides that must be constantly attended to and mitigated.

Self-perpetuation becomes all important, sometimes at the expense of what the organization is supposed to be accomplishing.

Size and growth are usually accompanied by alienation.

Bad behaviors can become entrenched to the point of pathologies.

Leadership, insulated from the chaos of the marketplace, comes to believe that it alone has the wisdom, understanding, and vision to achieve goals and objectives.

Being told that what the organization is doing that is wrong and harmful is not me with a smile, because organizations believe they never make mistakes.

I’ve experienced every one of these behaviors in churches I’ve attended. I’ve talked to people at enough other churches to know that this is not uncommon. 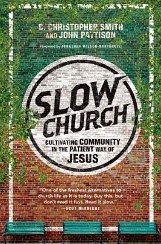 This is why I think Slow Church: Cultivating Community in the Patient Way of Jesus, by Christopher Smith, John Pattison and Jonathan Wilson-Hargrove, is one of the most important books I’ve read in the last decade, and why I’ve devoted the past many Mondays here to talk about it. I don’t agree with everything the book says, but then, I don’t have to agree with everything to understand that what it does is something vital.

Slow Church points to a different part, a different way. We the church don’t have to swept up in the culture of six-to-eight-seconds. We can resist and abandon what the authors refer to as the “McDonaldization” of society and the church.

“We’ve been formed by a culture of speed,” the authors write, “but if we recognize our malformation, and the selfishness and fearfulness that are fueling it, perhaps we can become less resistant to God’s transformation.”

Slow Church, above all, points to a choice we can make. We can choose a different way, a transformed way.

The church can become the alternative to the sic-to-eight-seconds mentality.

Photograph by Vera Kratochvil via Public Domain Pictures. Used with permission.
Posted by Glynn at 5:00 AM

"Speed is exhilarating, for a time. Then it becomes exhausting, and then destructive."
Isn't that the truth.
Yesterday, my husband and I sat on the couch together, just cuddling, not doing anything. All weekend long he'd been asking me what I needed after a long, hard week. I couldn't say. With four young kids, a recent move and home improvements to make, we've been moving faster and faster, slumping on the couch to watch TV in the evening. Yesterday the kids swirled around us, but we sat still in the midst of it for a long time. Doing nothing, just being together and I realized it was exactly what I needed.