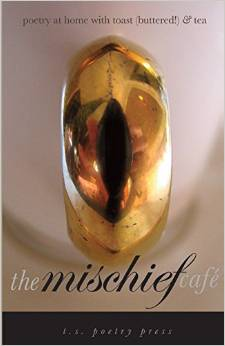 There is mischief afoot.
No, Watson, the game’s afoot.
The Mischief Café has opened its doors,
poetry at home with toast,
buttered (not artisan), & tea, although
some insist upon coffee, grounds
for litigation by the tea crowd. Just so.

It is a book, you see, a book
of poems, and dreams,
of poems, and screams
of delights, oohs and ahs,
and prompts and pages
blank with expectancy
waiting to be filled and poured.

The Mischief Café’s a traveling café,
a minstrel show, a lyceum,
bawdy vaudeville, a hermit’s retreat,
a Facebook post, an introvert’s tweet,
filled with blank pages, a journal,
because all poetry begins, or hesitates,
upon blank pages, and dreams.

There is mischief afoot.
No, Watson, the game’s afoot.
No, Holmes, my ruler’s a foot.

So, if you wondering what this is all about, L.L. Barkat has published The Mischief Café, which is a book of poems and prompts with blank pages, inviting you to write your poems, and create some mischief. Three of my own poems are included, among many others.

It is a strange thing to see one’s own poems published in a collection. I first had to ask myself if I really wrote them, and the answer is yes, I did; I even remember when I did. And the second thing I asked myself is why am I feeling so mischievous? The poem above is the result.


If you’re feeling mischievous, The Mischief Café is a good way to start.
Posted by Glynn at 5:38 AM

Why, this is a new side of Glynn. Mysteries never cease, do they? I'm going to have to check this out.

Thanks for the fun this a.m.

you think it
strange? not more
so than i, sir! with
my lower case short
silly small
words inking page
forty-four. to be
among greats like you
grants me leave
of my senses - i may
drop my cloak of introvert
and invite others to
partake of loose poetical mischief
plans with me. of course you'll be there
with your offerings of three.

"because all poetry begins, or hesitates,
upon blank pages, and dreams." I like that. :)

The BEST part of that book is the blank pages and the prompts.... The best kind of mischief.

Oh, I love this poem!

And it completely captures the spirit of the Mischief Café (both the book and the traveling experience :) )