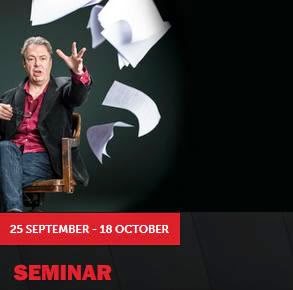 As we rather quickly planned our vacation to London (the flights and hotel finally came together three weeks before we actually left), we bought tickets for a play that a friend had recommended. It starred Roger Allam, an actor we had seen in a number of British television programs, including Endeavour, the series on Inspector Morse when he was a young policeman (Allam played Morse’s boss, Fred Thursday). Allam is most famous for first playing Inspector Javert in the stage production of Les Miserables when in opened in London in 1985.

When I ordered the tickets online, I discovered that the play was close to sold out. On the night we planned to go – our last Saturday in London – there were two tickets left – right in the middle of the orchestra, six rows back from the stage (the Hampstead Theatre seats 325). Someone must have just turned them back in. I grabbed them.

The theater is in near northwest London; we maneuvered our way there via the tube, exiting at Swiss Cottage (the theatre must be all of 50 feet from the tube station entrance). The building is on the contemporary side.

The play was Seminar, written by American playwright Theresa Rebeck. The play debuted in New York on Broadway in 2011, in which actor Alan Rickman played the role Roger Allam had in London.

In addition to the programs, I also bought the script – it cost five pounds, about the same price as the ebook on Kindle. Reading the script after seeing the play allowed me to see the small but important changes in the stage play to accommodate a largely British audience (mostly references to writers’ colonies in the United States).

Seminar is a play about writers and writing. Four young writers (Kate, Martin, Izzy, and Douglas) are meeting at Kate’s apartment for a writing seminar, taught by an older writer and editor named Leonard. They share the insecurities common to all writers – the fear of being bad, the fear of rejection, the fear of fellow writers becoming more successful, or even being published first. Leonard, with the subtlety of a charging bull elephant, runs over all of them.

Leonard, as it turns out, has his own insecurities (what writer doesn’t?). He had had a promising writing career until accused of plagiarism. It wasn’t true (or was it?), but it was sufficient to derail him, until a friend got him a job as an editor, which he was brilliant at.

And so they listen and spar, argue and scream at each other, have affairs with each other (and Leonard), and make more than ample use of the f-bomb. For a group of writers, their vocabulary seems limited, and the f-bomb is clearly one of their most commonly used words. (There’s also brief nudity; Izzy lifts her blouse for a few moments while she walks around the stage to make a point.)

But still, the play is about writing, and what it says about writing and writers is familiar to anyone who has picked up a pen and sat in front of a computer screen to use words.


It was also a treat to see Allam; he played the part of the aging writer/editor to perfection, f-bombs and all.
Posted by Glynn at 5:00 AM

Glad you and Janet enjoyed the play.

I don't mind an occasional use of the "f-bomb", especially when it's credible, but using it repeatedly is akin, to me, to resorting to violence because nothing else comes to mind. Rather unimaginative.