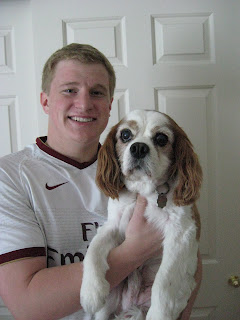 I’ve been following my online friend Marcus Goodyear’s tweets and posts about the death of the family dog. I realized I haven’t talked about my dog in this space before. He’s getting up there in age, and after reading those comments by Marcus, I’d rather talk about my dog now than do the eulogy later. Except, as I constantly tell my wife, the dog is never going to die.

His name is Cody. His breed name is bigger than he is – a Cavalier King Charles Spaniel. He’s been with us since my youngest was in third grade. My youngest is now in college. That makes Cody old, in human years.

It took my youngest some considerable period of time to convince his mother that we needed to get a dog. His older brother never seemed to care for pets; he was too busy at baseball, soccer, football, basketball and any other sport available. We knew we had a problem with our oldest when, at five years old, he would get up at 5 a.m. on Saturdays and watch golf on cable.

But the youngest wanted a dog, and gradually he wore his mother down. But she had a plan of her own – she wanted a contract, signed by him, that said he would take care of the dog. She was also nobody’s fool; she had my son’s co-conspirator – me – co-sign the contract.

I began to research breeds. My wife’s instructions were relatively simple: small, good with kids, no shedding, no nervousness (what she calls “yippiness”), and a minimalist barker. I read a lot of dog magazines (this was before a lot of stuff available online). I talked to friends and people at work. A woman at work told me about her dog – a Cavalier King Charles Spaniel – and told us to visit. She lived all of two blocks from our house, so we visited. And fell in love with the dog.

The breed fit almost all of the requirements: small, great with children, no nervousness, and relatively light on the barking. Only one requirement was missing – these dogs shed. I mean, they shed, as in big tumbleweeds of hair blowing through the house. But I could point to several comments in dog magazines about “minimal shedding.” I didn’t point to the fact they were mostly lies.

The next step was identifying a breeder. At the time, breeders of these dogs were few and far between, and deliberately so – that’s how the price stayed as high as it did, by restricting supply. Ours cost about $200 – a pound. There was a breeder in the St. Louis area, but she didn’t have any puppies currently available. My friend from work suggested her breeder – a woman who lived on a farm in eastern Kansas.

And that’s what we did. It became an event in my relationship with my youngest child. Early on a Friday afternoon in October, I got him out of his third-grade classroom early (that alone made me a hero) and we drove from St. Louis to Topeka, planning to spend the night there, before going on another 35 miles to St. Mary’s, Kansas, and then a few miles north to Emmett. Except there was a hot rod convention in Topeka, and there was no room in the inn. Any of the inns. So we backtracked to Lawrence and stayed at a Holiday Inn that my youngest still remembers because the lobby contained a putt-putt golf course.

The next morning, we drove to Emmett, which was rural. Rural as in, you get off the county road on to a dirt road for a few miles until you come to the log bridge (real logs, included the bridge floor) over the creek. The farm where the breeder lived was just past the bridge.

It was a good place to breed dogs. This was a farmstead, and the breeder supplemented the family income. There were nine children, so these dogs and their puppies were around kids all the time. We first met Cody in the arms on a three-year-old, or at least one of the arms of a three-year-old, who was carrying the puppy around like a bag of groceries. Papers, dog and cash exchanged hands, and we were officially dog owners.

Before we left the farm, we sat in the family mini-van and looked at our newest family member, sitting quietly in a small box on my son’s lap. Cody (the name was selected by the youngest) began to cry a little bit, and my son stroked his head and calmed him down. Then he looked at me and said, “Dad, we are so blessed.”
Posted by Glynn at 5:35 AM

"wore his mother down"

that made me smile. yup.

that is one good story!