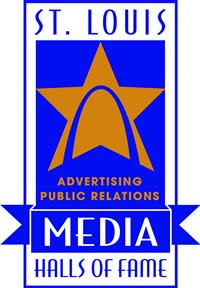 If I told you my wife said I had to post this, I would not be telling a lie.

Back in March, I received an email from the St. Louis chapter of the Public Relations Society of America, announcing the opening of voting for the St. Louis Media Halls of Fame/Advertising and Public Relations section. The Halls of Fame program started in 2002 for radio; television and print journalism were added in 2006; and advertising and public relations in 2007. Different groups vote to select winners in the different sections.

There were a whole bunch of nominations in Advertising and PR, like 30 or so, and we could vote for a total of seven. So I scanned down the list to see who had been nominated. And right there at the bottom (it was in alphabetical order), I found my name.

My first thought was, someone made a mistake. My second thought was, I'm not that old. The list of people named in 2007 and 2008 have a lot of "emeritus" types of titles. I've never been named emeritus anything, at least not yet.

One of my colleagues at work distributed the email across the department -- there were three people connected to my company on the PR list -- one deceased, one retired, and me. I looked at the people who had been elected in 2007 and 2008, and there were NAMES, names like Al Fleishman and Bob Hillard, as in the founders of Fleishman-Hillard. Oh, boy.

Votes were sent in and tabulated, and then, a long period of silence. I had forgotten about it (seriously) until I was called in late June and asked for a photo and a bunch of background information. Oh, boy. I was one of five St. Louis PR people named in the class of 2009.

The web site for the Media Halls of Fame is maintained by the Missouri History Museum, and the list of new inductees was just published in the St. Louis Journalism Review. If you want to see my brief summary description on the web site, it's here.

Yes, my wife made me post this. But yes, I think it's kind of cool, too.

I think it's VERY cool. Congrats!

Yay for a wife who lauds you! And this is wonderful. I'm glad you shared.