A Movie, A Photo, Some Tweets and a Poem 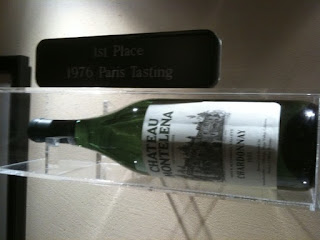 This is a story about Twitter, and poetry, and a movie. And how the human mind works.

Based in Tennessee, Randy Elrod is a speaker, consultant, chef, wine connoisseur, artist and general all-around culture creator. Last Saturday, he and some friends were concluding a Napa Valley winery tour. He had been tweeting the tour and posting pictures on Twitpic, inspiring the grand old sin of envy in any of us who had been following his progress. He posted a photo of a special bottle of wine – a 1973 California Chardonnay that changed the course of the wine industry and wine history. And he pointed out that this was the wine that was featured in the movie “Bottle Shock.”

shrinkingcamel: Me Too! Saw a couple wks ago. RT @llbarkat: @gyoung9751 I LOVED that movie 'Bottle Shock.'

llbarkat: Okay @shrinkingcamel and @gyoung9751 this feels like a party now. :)

gyoung9751: It does indeed. Camel should write a poem. RT @llbarkat: Okay @shrinkingcamel and @gyoung9751 this feels like a party now. :)

shrinkingcamel: On the phone for 2.5 hours so far with Dell OnCall helping fix a computer bug. I planned 4 hours. Helps to plan for the worst. Almost done!

shrinkingcamel: A poem? While I'm on the line with Dell? And Tweeting? That's way too much multi-tasking. (Plus I'm making a sandwich)

llbarkat: RE: Camel's too slow for @llbarkat . Okay @gyoung9751 and @shrinkingcamel , you two officially inspired next week's RAP. :)

gyoung9751: @llbarkat & @shrinkingcamel Sounds like young and camel will be singing a RAP song about Chardonnay. Signing off.

llbarkat: @gyoung9751 @shrinkingcamel Sounds like young and camel will be singing a RAP song about Chardonnay. Signing off.<<<> wait and see.

A “RAP” is a Random Act of Poetry, a weekly feature on The High Calling Blogs that’s written and managed by L.L. And she was true to her word (or threat) – our exchange helped inspire the RAP article posted yesterday on how people bind together after tragedies like 9/11. And then, in the comments, RAP participants spontaneously began writing poems. Here is the column and the comments.

The fun thing is – shrinkingcamel got bit by the poetry bug. "Shrinking the Camel" is the name of a blog on faith in the workplace. Shrinkingcamel is the Twitter name. The person who does the blog and the Twitter account goes by a pseudonym; all we know is that he’s a business executive who lives in the northeastern United States. There is a real name somewhere behind the curtain (or underneath the camel). I keep things simple by referring to him as Camel.

So a photo of a bottle of wine connected three online friends to a movie, inspired a short poem, produced a column on poetry and 9/11 AND led to a camel writing poetry. Only on Twitter. Incredible. And our thanks to Randy Elrod for (unknowingly) setting the whole thing in motion.

My poem, as composed on Twitter and recomposed by L.L. Barkat for the RAP:

L.L. added the Chardonnay bit. I wasn’t drinking Chardonnay when I wrote it, but what the heck, it sounds like I should have been.

This delighted me. The strange path to camel poetry. :) I love how things morph.

Ohhhhhhh... now I see it. The Chardonnay was in the "Bottle Shock" bottle! Too funny. Still, what were you drinking, that was reflecting in the screen? :)

So maybe I should change it to "by @gyoung9751, while wishing he was drinking Chardonnay"?

Actually, I wasn't drinking anything at that moment. It was the "flickering screen" (the movie) that was reflecting the "golden liquids" (the wine). But I like the "wishing" suggestion. :)

Very Very Cool! Nice Glynn, how you summed up all the serendipity.. Can we attribute to Grace?

I wish I could have been in on this, back then. :)
Absolute lagniappe. Raise a glass to Randy.