An Interview with Christina Berry 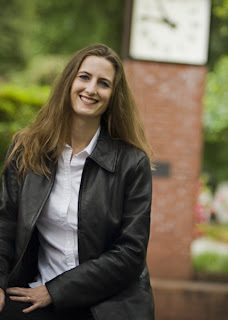 Christina Berry’s debut novel The Familiar Stranger is a corker of a story about betrayal, amnesia and, ultimately, grace. I’ve posted a short review at Amazon and will have some additional thoughts tomorrow, but Christina answered a few questions about the novel and her writing life that put the story in an interesting context.

Christina, what’s the plot of The Familiar Stranger?
Craig Littleton's decision to end his marriage would shock his wife, Denise -- if he knew what he was up to. When an accident lands Craig in the ICU, with fuzzy memories of his own life and plans, Denise rushes to his side, ready to care for him. They embark on a quest to help Craig remember who he is and, in the process, discover dark secrets. What will she do when she realizes he's not the man she thought he was? Is this trauma a blessing in disguise, a chance for a fresh start? Or will his secrets destroy the life they built together?

Where did you get the idea for the story?
In the summer of 2006, two stories appeared in the newspaper. One was a huge, national story; the other a smaller, local-interest item. I wondered what it might look like if those two stories conceived a child. Boom! I had the entire plot for The Familiar Stranger. It will be interesting to see if readers can figure out which stories inspired the book.

Though the plot of The Familiar Stranger came from news stories, I’d been looking for a fictional vehicle to express the lessons I’d learned regarding forgiveness in my own marriage. I knew no one was interested in reading my particular story, but I still felt God had given me something to say. My husband and I worked through a major issue six years ago and found a vibrant, completely renewed marriage on the other side.

However, seven months ago, that same issue broke our bond. Now as a newly-single woman, I’m in the midst of promoting a book that touches far closer to home than I would have ever dreamed. If no one else ever reads it, I’ve been convicted and encouraged by my own words. If that isn’t a gracious God at work, I don’t know what is!

What kind of planning do you do before writing a novel?
My previous writing has been heavily plotted and I’ve known almost everything about the characters before diving into the story. Writing with a co-author, Mom and I both need to know exactly how a character looked and his or her history. We wrote out each scene’s main plot point and point of view character on index cards and posted them on a large corkboard. We also found catalogue models that looked like our characters, made collages of the pictures, and slipped our character interview in the back of the plastic sleeves.

With The Familiar Stranger, the first scene came to me like a movie. Once the first chapter was written, I took a few hours to write down how I saw the story progressing. Then I numbered each main point and called it a chapter. All told, I had just over one page of plotting. To keep everything straight, I made notes about the characters as I went along. A very different experience to write by the seat of my pants, but I’m working through my current book in the same way.

Some Christian writers argue that fiction is first and foremost entertainment and decry any "agenda driven" stories. What do you think?
I say we're all writing with an agenda, whether we recognize it or not. Maybe it's to show what a godly romance looks like, maybe to draw attention to child abuse, maybe to attempt to understand why people are capable of such evil, or ... With this book, I felt called to share what God has taught me about forgiveness. However, if the story is not presented in a highly entertaining way the agenda will never be accomplished because the reader will toss the book down if she gets bored. The real skill—and I am by no means saying I'm setting the watermark with my writing—is to so thoroughly wrap the story around the agenda that it becomes unrecognizable to the reader. I'd love to hear other’s opinions in the comments.

What takeaway value do you hope readers receive after reading your novel?
The recent changes in my life—losing my husband, facing finding a “real” job, selling my home—have done nothing but solidify what I hope to be the theme of the book and my life: Live Transparently—Forgive Extravagantly. If reading The Familiar Stranger makes even one man or woman be more honest with his or her spouse or delve into trust issues in a healthy way, I’ll consider it a success. Maybe there’s a hurting heart that can find a new path to forgiveness because of the story.
Posted by Glynn at 5:44 AM