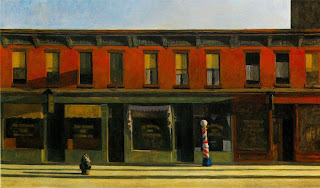 Morning blue
Sky; then
Shadowed eaves,
Then becurtained,
Ledged windows
Facing from
The yet asleep,
The almost awakened;
Yellow. Black, white
On red, perhaps brick;
They still used
Brick in 1930.

Then layer of floor
And ceiling, bottom
And top
To separate the
Sleeping from
Empty stores, all
Commerce ceased.
They still closed stores
On 1930 Sundays.

And what of
Pudgy hydrant,
Fat with ready
Flow,
And ribboned pole
Of barbers?
Vertical incongruities
Amid the horizontal,
The exceptions
To suggest a rule,
Perhaps.
They, too, cast
Their horizontal
Shadows, the rule
Flowing even
From the exceptions.
Or do the shadows,
Transparent stains
On sidewalks,
Cast hydrant and pole?

Only the shadows
Break the silence.

I like that the "pudgy" hydrant is on the diagonal with the barber's pole, which isn't quite sitting up straight, both parallelling the shadow above the eaves; the "2-2-3-2" rhythm of the windows and colored shades. I like how you layer the poem, as the poem is layered. One can feel the emptiness Hopper paints on canvas. Small town, a different time, an early morning just waiting.

Of course, I meant to say, "I like how you layer the poem, as the painting is layered."

And I'll add, I like the idea of "stacked" paint. Quite a visual image.

Again, so much to like. Here's just one (love the sounds)...