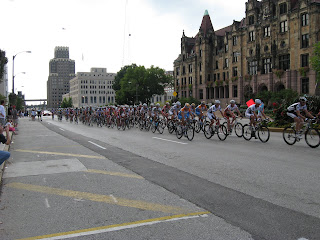 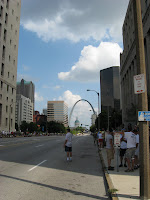 A professional photographer I'm not. My wife (rightfully) even questions my amateur status. But I had a great time Monday taking photographs of Stage 1 of the Tour de Missouri held in St. Louis, posting a few tweets on Twitter about the race, and soaking up the great weather with my wife and daughter-in-law (son was working).

Stage 1 was a 10-lap cicuit race, the cyclists riding the same 7.5-mile lap ten times. For most of the race, three cyclists led the peloton by a good 50 to 55 seconds. Gradually, the peloton grew closer to the three, and by the final lap had absorbed them back into the group. The race became a wild, mad ride to the finish, with the sprinters jockeying for the win. And Mark Cavendish of Team Columbia-HTC pulled it off. He's the cyclist who won six stages of the Tour de France and is becoming known as one of the best sprinters in the world.
In the top photo, the peloton is passing St. Louis City Hall. Yes, I know it looks like a haunted mansion, sitting Gothic-like in all its glory. If you look closely, you'll see it actually has two different building materials - a rose-colored stone on the bottom floor and a more sand-colored stone on the upper floors. There must be a story there, but like most St. Louisans, I've never bothered to ask and simply accepted it. The building was designed in 1890, completed in 1904 (just in time for the World's Fair, which is still something the equivalent of a religious cult here), and roughly resembles the City Hall in Paris. The interior is something else -- a vertiable explosion of marble staircases, balconies and arches.
A great day and a great race.
Posted by Glynn at 8:37 PM