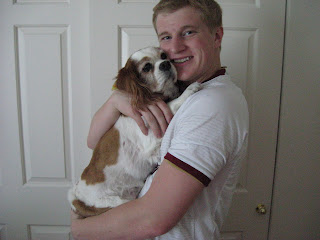 So we brought our Cavalier King Charles Spaniel home from Emmett, Kansas, and life would never be the same.

He might have been home all of two days when we learned that he liked to bark at dogs in general, but would imitate the ferociousness of a pit bull when it came to Golden Retrievers. Reason: unknown. It just happened. Cody has never thought of himself as a small dog, and will never back down from a barking contest with any other kind of dog. Especially Golden Retrievers.

His first few nights home, he did two things. First, he ate the cardboard box we placed in his crate for a bed (he was just under four pounds and we bought the crate for a fully grown dog, even if he was small). Second, he cried. For several nights, it became a ritual: puppy put to bed; sons put to bed; Mom and Dad put to bed; puppy cries; Dad gets up, scoops the puppy up; Dad lies on the sofa with the puppy going to sleep on his chest. I know, it was the totally wrong thing to do. But it only lasted a few nights, until Cody figured out the routine (I never told my wife) (maybe I just did).

After a few months, we enrolled Cody in obedience classes, which he enjoyed but the lessons weren’t very long-learned. Mostly because of the fact I rarely did the homework. Still, as I liked to proudly point out, he was salutatorian in the agility classes (OK, so there were a total of four dogs in the class). (Cody did not graduate at the head of his class in obedience.) My most memorable moment from the classes was when we all sat in a circle and passed our dogs to each other, to familiarize the dogs with people other than their owners. The first dog passed to me was a full grown Doberman pinscher, who stared at me with a look that inspired a vision of me lying on the floor with a snapped neck. The dog’s name was Toby. Instead of snapping my neck, he licked me in the face. I looked like someone had thrown a bucket of water on me, but I was totally thrilled. Or relieved, whichever came first.

Cody settled into the family. Dogs are creatures of habit and routine, and Cody is the stereotyped rule for that. He knows the precise time he should be walked in the morning, at lunch, before dinner and at bedtime. If the schedule slips, he lets us know, usually by licking and rattling his food bowl. He eats dinner before we do, but he knows to expect a snack or “second thing” once we finish eating. It doesn’t matter what the second thing is, as long as it materializes.

Cody has lived up to the breed’s reputation for friendliness and sociability around children. He doesn’t complain (unless it involves his food routine). For a long time, he liked to eat anything, and we had to be careful about what landed on the floor (a stray piece of pepperoni from a pizza taught us that lesson). One of his favorite “snacks” was to eat the small cardboard tags attached to the youngest’s Beanie Baby collection, which, my son pointed out, destroyed the collection’s value (as if there were any).

The breed is prone to two physical ailments – heart murmurs and ear infections. Our Cavalier has somehow managed to escape the heart problem (“He has the heart of a five-year-old dog; he’ll live for years yet,” the vet tells us cheerfully, pleasing me but totally discouraging my wife). But Cody has the market cornered on ear infections – long ears and small ear canals are perfect characteristics to keep the veterinary pharmaceutical companies profitable forever. Cody’s ears alone have likely been responsible for many executive bonuses.

Like most dogs, Cody loves naps. He knows about Sunday afternoons. He fully expects a nap with Dad, positioned right between Dad’s feet, for precisely one hour. If I decide to go biking instead, I get a look of abject heartbrokenness. This dog knows how to inspire guilt.

Last year, he became a college man, and moved into the fraternity house with our youngest. He became a major attraction, especially for college students of the female persuasion. His photo was included with the fraternity composite, he has his own Facebook page and he claims to have hazed some pledges, if walking a dog three times a day constitutes hazing.

He’s now back at home. However you calculate the formula, he’s really old – ancient – in dog years. He has arthritis and is increasingly deaf. Getting up and down the stairs is more and more a problem. He’s also more crotchety and tends to show some temper now and then (“leave me alone inside, will ya? Guess what that puddle is on the hardwood floor?”). He’s sleeping more, and his totally precise biological clock doesn’t work as well as before. But when it’s time to eat, he’s still a brand new puppy and can move like greased lightning.

One day, I’ll have to face “life without the dog,” but, well, maybe not. My wife is less concerned about the impact on our youngest and more about how I’ll react. I don’t know why. There’s no need to worry about it, because I can’t imagine it. It can’t happen. And it won’t. So there.
Posted by Glynn at 6:24 AM