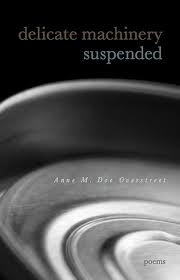 In June, poet Anne Overstreet published her first collection of poems, entitled Delicate Machinery Suspended: Poems. It is about memory and faith, affection and love, work done and work done well, and even playfulness. The poems are about a life observed, but also a life to come. It’s a beautiful work.

Anne’s poems have been published in the Asheville Poetry Review, Radix, DMQ Review, Relief, Talking River Review and several other publications. She is a Soapstone Resident and a two-time Pushcart Prize nominee. She’s conducted a number of workshops, and her poetry has appeared as part of the Cody Center Exhibition “Pairings” at Laity Lodge in Texas. She lives near Seattle with her husband, author and film critic Jeffrey Overstreet.

We talked with Anne about her poetry, her background and experiences, and the influences on her writing.

There's an affection for the past, or perhaps a gratitude for the past, especially in the first section of the collection. It's not seeing things through rose-colored glasses but with fondness and appreciation. Are there any specific things from your upbringing that has shaped your poetry and writing?

Again, I suppose the family reading time was instrumental. We also traveled a fair amount--to campgrounds and national parks, and to visit relatives. Road trips still put me in a writing groove. We also all took music lessons: everyone in my family, including my parents, played at least one instrument and sang. All of those things feed into the way I hear and into what drops me into gear. But such a list risks sounding nostaligic. And while the poems in this collection are quite often narrative, I try not to dwell in sentimentality or nostalgia, but to be attentive.

"Souffle" is an absolutely beautiful love poem. Can you speak to what inspired it?

Jeff and I are friends with several wonderful couples who remain enamored of each other, finding each other beautiful even as they age. I want that, revere and relish it. For them, sensuality runs deeper than smooth skin and an absence of wrinkles. Affection and desire are nuanced--a hip’s swing, the way a woman looks over her shoulder, how two in familiarity dance through preparing a meal. “Souffle” was written about one friend who attempted his first soufflé ever as an offering to his love. I have yet to attempt a soufflé; perhaps Jeff will someday.

"How Water Folds Over" contains an arresting and wonderful image - the idea of water "folding over." Can you tell us about this poem, how you created that image?
It is baffling to me that an Egyptian soldier just doing his job would lose his life in the parting of the Red Sea based solely on his nationality, his exclusion from the nation of the people of God. Yet I believe God is just and good. I know it’s not that simple, theologically speaking; still, it troubles me so I explore the question. And perhaps because I was raised on flannel-graphs, I picture the sea folding over the army like a blanket. It also corresponded to an experience I had as a kid when I thought I was going to drown. The water had such tangible weight.

Some of your poems get almost playful, and I say "almost" because they still retain a serious tone. I'm thinking here of poems like "Sleeping in Grandmother Wolfe's House" and "Red #9, which are almost retellings of "Little Red Riding Hood." What inspired those poems?

Red’s one of my favorite stories, loaded with archetypes, with deliciously dark overtones, like so many fairy tales. Each figure is distinct yet plays a multitude of roles across different times and cultures and continues to be reinterpreted. In Red Riding Hood, there’s the tension of the matriarch/girl-child, the wild/civilized, the female/male, the animal nature/the moral nature, and the politics of power. And it’s powerfully feminine without the heavy-handed focus on Red’s virtue.

What would you like a reader of the poems to experience as they read the volume, and how would like them to respond when they've finished?

If I ever get a tattoo, I think it’d be “Be still” in Greek. I hope the work might incline a reader toward the still small voices. There are certain texts that wake me up—like Annie Dillard—that pull me toward attentiveness. Things get larger, deeper, calmer. I’d like to have that kind of an effect. Just a little.

At The High Calling, Anne discusses about how she came to write poetry, how various jobs she’s held influenced her writing, and how she uses details to make her poems so powerful.

The interview with Anne continues at TweetSpeak Poetry, where she discusses influences on her poetry and the significance of faith.

You can read a review of Delicate Machinery Suspended: Poems at TweetSpeak Poetry.
Posted by Glynn at 5:00 AM

Excellent interview, Glynn. It's fun to take a peek behind the poems and learn a little more about their creator.

"We also all took music lessons: everyone in my family, including my parents, played at least one instrument and sang. All of those things feed into the way I hear and into what drops me into gear."

Ah, makes me glad I am focusing on music this year. I'll be needing to sit at the piano too (not just my girls). So fascinating to hear how something like this could be carried through a child's life into an adult practice like writing poetry.

I love the thing about the water folding.

I love your questions, Glynn, and this entire interview, spread across its three locations, is simply amazing. :)

I also appreciated "Souffle." Others too, of course, but that one was fun.

Hi, Anne. Waiting for the book from Amazon. Say hello to Jeffrey for us.