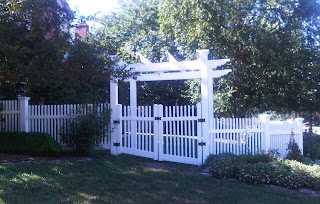 We’ve lived in our house in suburban St. Louis for 25 years this month. It occupies a corner lot. For various and sundry zoning reasons and setback requirements, the house isn’t centered on the lot, so a big chunk of the yard is front yard and side yard.

It wasn’t an ideal lot, but it was close to ideal for a fence. But not just any kind of fence. It had to be a “pretty fence.” And it became a story in two parts.

The Fence, Part 1: My wife worked with a garden designer who specialized in historic gardens, and a landscape expert so we’d know what to plant and where. The fence would be constructed of redwood. And it would have a main arched gate and posts that looked like something out a Victorian magazine.

This was an “event” in the neighborhood. Most people were curious. An adjoining neighbor was moving to another city, and they were nervous. Their house was for sale, and somehow they got it into their heads that our fence would keep them from selling their house.

Everyone, including the nervous neighbor, knew that construction would start at the end of May. The day came. The construction crew arrived with the pieces of fence. Holes were dug for the posts. Concrete readied. Posts were placed.

The nervous neighbor freaked. The wife nearly became hysterical and made a scene. More than once, too. She went door-to-door in the neighborhood, ranting. No one understood what the problem actually was, but whatever it was, it was huge.

The fence went in. A few weeks later, the neighbors sold their house and moved out of state.

We learned that Robert Frost was wrong: fences do not necessarily make good neighbors.

The Fence, Part 2: The fence was gorgeous, literally a traffic stopper. It became something of a landmark in our area, perfect for giving directions (“It’s just two streets past the big white fence”).

It wasn’t long after it was installed, however, that we noticed the white stain was flaking in places. We didn’t think stain was supposed to flake. Lots of phone calls and several visits later, we discovered what the problem was.

To give it a finished look, the carpenter had planed the redwood. It did give the wood a finished look. It also sealed the wood. The wood wouldn’t hold a stain, or paint, or anything. It was like Teflon. Thus began a saga lasting years. I scraped, sandpapered and stained. And painted. Countless others did as well. The pretty fence needed constant attention and upkeep.

Finally, after more than a decade, we discovered some posts were rotting. They would need to be replaced or torn down. We did both. The famous fence was torn down, and replaced with one that looked very similar, except the main gate wasn’t arched. The posts, though, looked almost identical to the original.

The difference was – the new fence was plastic.

I love that plastic fence. And it’s still a landmark.


This post is submitted to the One Word Blog Carnival hosted by Peter Pollock. The prompt is "fences," and to see more posts based on the prompt, please visit Peter's site. The links will be live at 10 p.m. Central time tonight.
Posted by Glynn at 9:00 PM

But trust me, Glynn, eventually there will be moments in the still of the night when sleep does not come easy.
It is then, when deep in your heart, you will pause and wonder.
One day, my friend, you will have to account for this serious fall from good taste, to a much higher authority than your readership!

I think your fence is pretty.

Just to let you know there is a house for sale on our street that you could put a pretty little fence around. I miss the fence!

Well told! And it made me laugh to reach the end and find you had such an ingenious solution.

Nicely done, Glynn -- in both the fence-building and in the retelling.

Is the photographed fence THE fence -- the original redwood one? It is really quite lovely.

Reading this post, I just now realized that I've never lived anywhere with a fenced yard.

I love your description of the reaction of the neighbor with the ugly fence. That's classic.

Oh, Glynn! I love, love, love your fence! I have always wanted one like that. If I ever get one, I now know to make it plastic! LOL Loved your story!

I loved the story!

"the fence looked shabby on its own."

And your fence, ya… I'm glad we aren't next-door neighbors. We'd look pathetic next to you.

what a story! glad it all worked out for you and the neighbors as well :)

Wow, that almost qualifies as a saga. And I can safely say I've never read a sage about fences, but that was very enjoyable. :) Thanks Glynn.

It is a very pretty fence. Our neighbors recently put up a fence, and I admit I was nervous about it. But it is hardly noticeable, AND it keeps their new puppy out of our dog's range. :-) Fences can be good.

And I love your story about your lovely fence.

A fence by another substance looks just as good!!

Your white picket fence is lovely be it red wood or plastic. I never would have thought plastic.
Some would say, not the real thing!

People are like that often - not real -- just plastic. Time to return to the master builder and get a redo - God is the one who makes everything new and better.

I love you white fence it's s great perfect!!!