Me and My Kindle 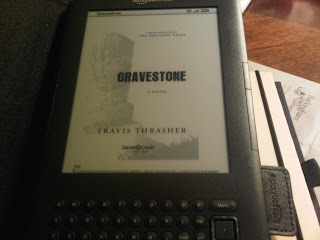 I had delayed buying an e-reader for a long time. It wasn’t that I was a “physical book I can hold in my hand or nothing” kind of person. It was more “this isn’t a priority right now.” I knew I did not like reading a book on my desktop computer. But Father’s Day was coming, and I solved my wife’s problem for a gift by saying I’d like to have a Kindle.

In due course, it arrived, “it” being the Kindle 3G. A friend at work had an earlier version. He had recently upgraded to a 3G, which he said was a vast improvement over earlier models.

Having the Kindle in my hands, I had to test it out. Immediately. The instructions were simple, and within seconds I had my first e-book, Gravestone by Travis Thrasher.

Press a button and it’s here.

Okay, so obtaining a book was easy. What would it be like to read one? Would I like it, or would I discover that that Father’s Day present was destined to sit on a shelf, gathering dust?

Gravestone was surprisingly easy to read. It was a good introduction to reading an e-book – fast paced and engaging, I’d read a page, press the advance button, and keep going.

I finished Gravestone and said, OK, that was all right. But what about poetry?

Right about that time, Maureen Doallas over at Writing Without Paper had a feature about poet Julie Kane, and noted that her first book of poetry, Body and Soul, was only available on Kindle. Ah, ha, a test! So I downloaded the poems, and found that poetry was just as easy to read.

Since then, I’ve two more, the suspense novel The Undertaker by William Brown and Underworld: The Modern Orpheus, poems by Matthew Duggan. And I took advantage of two promotional specials I ran across, one on Facebook and the other on a blog, and downloaded the English Standard Version of the Bible and another mystery/suspense novel, both of which were free (there may be no such thing as a free lunch, but there is such a thing as a free book) (and the ESV is still available on Kindle for free, as least right now). And I downloaded Breath for the Bones: Art, Imagination, and Spirit by Luci Shaw, just in time to start reading it for the weekly book discussion at The High Calling.

Two novels and two books of poetry later, I can say that I really like this little e-reader. I like it a lot. It’s easy to use. It’s back-lit, so you don’t get a lot of glare. It’s easily portable. And it can carry up to 3500 books. That last factor alone wowed my wife, who sees a solution to the bookcases that threaten to overwhelm our house.

It’s not better or worse than reading a physical book. And there are going to be some books that simply won’t work on a Kindle; I’m thinking here of books like The Four Holy Gospels, illustrated by Makoto Fujimura, which is more like a work of art than books.

But for the vast majority of books, the Kindle will work fine.

As I sit here, reading on my Kindle, that with the cover weighs less than 14 ounces, I’m beginning to glimpse one of the forces transforming the book publishing business.
Posted by Glynn at 5:00 AM

There's only one real problem with the Kindle, as far as I'm concerned: that "BUY" button is too darn tempting!

I'm with you on this one Glynn -- except I read on my IPad -- never ever thought I'd read an electronic book -- I'm a purist you know!

It is so available, and immediate and easy and... need I go on.

Yeah -- see! YOu can teach old dogs new tricks! And I can prove myself wrong quite easily! (never say never)

How timely! I just received a Kindle as a gift yesterday--haven't even taken it out of the box yet. I started thinking about getting one when I could no longer read the small print while using my elliptical machine and couldn't bear to wear reading glasses while exercising. When I realized I could adjust the font size, I was sold. Then I started seeing so many book recommendations from other bloggers, I figured the Kindle would be a great way to keep up. (And yes, Breath For the Bones is on my download list) Great news about the ESV Bible. Thanks!

I can see that I'm now going to have to start adding "Available on Kindle" to all my reviews.

You know, of course, you can also get an app for your Kindle called cloudreader -- it will hold all that text in a cloud.

I'm not ready to defect yet.

I've sure enjoyed my Kindle, both for the instant gratification and for the breathing space for my bookshelves. But before my summer trip, I went to the library to get a real book to read on the plane. The pilot will never tell me to turn it off!

I put my Kindle under the tree last Christmas. I'm loving it. But I keep adding books, and it's filling up as quickly as my bookshelves. Lots of freebies.

But I still wish I'd gotten Luci in a touch-and-feel book. I plan to do just that.

I just got a Kindle too! I was rather one of those who resisted. But I love love love it. I love the 'electronic paper' (not really backlit, I need a light if I'm in the dark). I love having several books at my disposal when I go out on errands and have to wait.

The thing I really love about it is that it is transforming my reading. I have always been a slow, plodding reader, with not great comprehension. But with the Kindle's limited screen and words, I focus only on this present passage. I don't worry how big or long the book is. Since switching from reading War & Peace in an 1,100-page book, to reading it on the Kindle (all of Tolstoy's works were something like $1.99), I feel free of the weight of the book that was looming ahead of me. I think nothing of that now, in any book, and this is an unexpected benefit and pleasure.

I'll be one of the last to jump on this train.

I was given a Kindle as a gift not too long ago and have been surprised at much I enjoy it. I still enjoy holding a book though!

I go back and forth, to the Kindle and the feel of a real book, best of both worlds. And I even use my kindle app on my iPhone, life is good.