"My Irish Dog" by Douglas Solvie 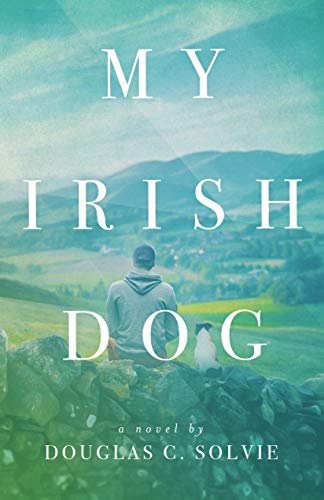 Spencer, which may be a first or a last name, works in Singapore. He’s in his early 50s. His wife died some years before, and his children are grown and involved in their own careers. He’s more than restless; something is tugging him at the core of his being. Something that suggests there is more to life. Or should be.

He flies to Ireland, ostensibly to do some flyfishing, but more in the hope that he can get to the bottom of whatever it is that’s bothering him. Spencer will meet a number of good, kind people. He will meet a few villains, people out to rob him or who suspect his motives. And he will meet a dog named Shandy, an Irish terrier with a serious illness who escapes from his owner. Shandy has a job to do, and that job just may involve Spencer. For his part, Spencer feels compelled to find the dog, changing his travel plans and enlisting the help of a young food store clerk.

My Irish Dog by Douglas Solvie begins slowly, but by about the third chapter, you’re hooked. The use of the planned robbery heightens the tension, and the plight of the sick Shandy (and an emotionally sick Spencer) opens the flow of empathy.

A native of Montana, Solvie has spent most of his adult life living and working in Japan. He currently lives in the state of Washington. My Irish Dog is his first novel, and is loosely based on Solvie’s personal experience, when he found a lost dog named Shandy during a flyfishing trip to Ireland.

Will the villains prevail in their robbery scheme? Will Spencer find Shandy? And will Spencer find himself? All becomes clear with this enchanting story of a man, a dog, and a bit of the Irish supernatural.

Thanks so much for the great review! Much appreciated.