"The Banished Heart" by Libi Astaire 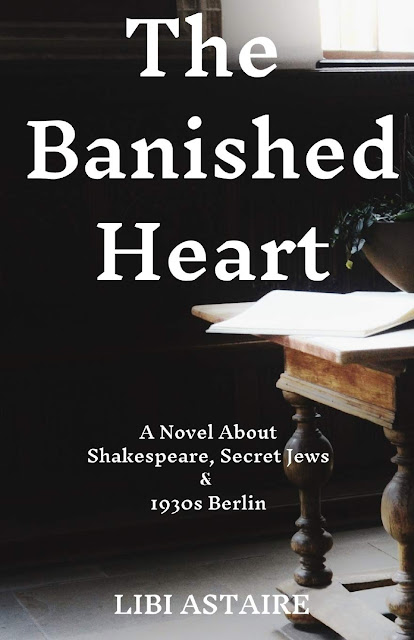 Paul Hoffman is preparing to defend his doctoral thesis on William Shakespeare’s The Merchant of Venice. He’s been navigating his literature department with varying degrees of success and failure. Everything has become political, and even a 400-year-old play can be suspect. His advisor is in one political camp, the department head in another.

Political violence erupts the day he is to make his defense; in fact, it happens just as his defense begins. Paul is verbally attacked by the department head and severely beaten by radical students. During a period of unconsciousness, Paul has a dream, in which he’s offered a choice. Stand for truth to make a difference, or die.

A story begins. It is a story of a young William Shakespeare, a boy in Stratford-on-Avon. He befriends another boy, whose family is ostensibly Christian and Anglican but are secretly Jewish. According to English law at the time, all Jews are banished from the kingdom. And it is the boy’s grandfather who begins to teach his grandson the Torah in secret. Young Shakespeare finagles his way into the studies, thing the Hebrew words and letters are a secret code.

From there, the story moves to Shakespeare’s London. The young boy is now a playwright of growing fame, one who’s caught the eye of Queen Elizabeth. Political events almost mandate that theater companies produce a play about an evil Jew. Shakespeare, remembering his childhood friend, is loath to do it. Eventually, he writes a play that makes the lead Jewish character seem human. It scandalizes the theater owner and Shakespeare’s patron.

What does this have to do with Paul Hoffman’s decision? Paul is living in 1933 Berlin. Hitler has just been elected, and Nazi violence, like the famous book burning, is on the upswing. During his thesis defense, Paul, who is Jewish, is attacked by faculty and students espousing Hitler’s cause. And he faces a decision.

The Banished Heart by Libi Astaire is the story of Paul in early Nazi Germany and William Shakespeare in a London hostile to Jews. It’s an almost hypnotic tale of anti-Semitism, mob violence, and personal courage. That Astaire combines the two historical periods in one story suggests that she clearly sees parallels.

Astaire has also published the Jewish Regency Mystery series, the novel Terra Incognita, a set of the retelling of Chasidic tales entitled Choose Light!, Day Trips to Jewish History: Essays, and The Latke in the Library & Other Mystery Stories for Chanukah.

The Banished Heart is a moving story of hatred, violence, mobs, and the courage required to swim against the stream. And it holds many lessons for our own time.