"Dead of Night" by Stephen Puleston 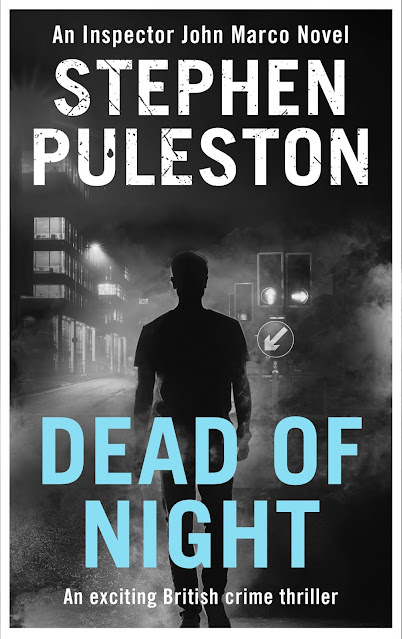 The winter has been brutal. Investigating crimes and suspected crimes has Detective Inspector John Marco and his colleagues in the South Wales Police Service shivering and cursing the wind and snow. They come up against what it means to really shiver in the winter, with the brutal death of a homeless man that is clearly homicide. The victim is one of many of the people “living rough” in Cardiff, and while most city residents might turn a blind eye to the homeless ness problem, Marco is determined to treat this murder inquiry like any other. The dignity of the victim as a human being deserves no less, Marco believes.

Early on, the investigation takes unexpected turns. Homeless people don’t like dealing with the police, but the ones who knew the victim seem especially wary. They also make themselves scarce, and they know where to go to stay out of the police’s sight. The problem is, the murderer also knows, and the homeless man died for a very specific reason – a reason that will lead Marco and his team into more murders, fraud, and corruption.

Dead of Night by Stephen Puleston is the fifth novel in the DI John Marco series, and it takes a decided turn toward social issues (like homelessness) far more than its predecessors. The reader sees homeless people through the eyes of a policeman who feels compassion for the people experiencing it as much as he feels anger toward the people who take advanrage of them – and sometimes kill them.

Puleston publishes two series of Welsh police detective stories. Detective Inspector Ian Drake is with the North Wales Police Service, and Detective Inspector John Marco is with the South Wales Police Service. The author originally trained and practiced as a; solicitor/lawyer. He also attended the University of London. He lives in Wales, very close to where his fictional hero lives and works.

Dead of Night is a solid police procedural as well as a good story. The reader experiences not only the occasional excitement of police detective work but the more common tedium of plugging away daily, chasing one lead after another, dealing with uncooperative witnesses and potential suspects, sleepless nights, and police headquarters politics. Puleston tells a good, gripping story.

My review of Written in Blood.

My review of A Time to Kill.

My review of Another Good Killing.

My review of Brass in Pocket.

My review of Worse than Dead.

My review of Against the Tide.

My review of Devil’s Kitchen.

My review of Dead Smart.

My review of Speechless.

My review of Nowhere to Hide.

My review of A Cold Dark Heart.