"Death Among the Nightingales" by David Field 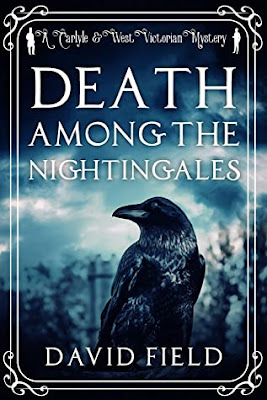 It’s London, 1895. An Irish terrorist sets off a bomb at a dinner of Coldstream Guard officers at the Tower of London. Florence Nightingale arranges for several of her nurses to attend the victims in the hospital. She also arranges for Adelaide Carlyle West, now the mother of an infant daughter, to have a monitoring and administrative role. Adelaide is married to Matthew West, the curate at St. Dunstan’s Church in London’s East End. Her father is James Carlyle, the coroner at the London Hospital.

Detective John Jennings of Scotland Yard is investigating the bombing. The political pressure to find the terrorists is enormous. Jennings finds himself in the position of having to rely upon Adelaide and Matthew, not to mention James, for information, leads, and possible suspects. And one lead points clearly in the direction of an inside job – someone in the room may have planted the bomb.

And then, one by one, Nightingales, as the nurses are called, are being murdered. They’re all in the night shift. The newspapers begin to trumpet the possible return of Jack the Ripper, more to sell newspapers than because of any evidence. It takes a while for Jennings to understand, but Matthew and Adelaide finally convince him that there’s a connection between the bombing and the murders of the nurses.

Death Among the Nightingales by David Field is the fourth of four books in the Carlyle & West Victorian Mystery Series. The first is Interviewing the Dead, the second is Death Comes But Twice, and the third is Confronting the Invisible. Field has also written six historical novels set in Tudor England and eight novels in the Esther and Jack Enright Mystery Series. A native of Nottingham, England, he practiced and taught criminal law for his professional career. He now lives in Australia.

It’s an increasingly tense story, irrevocably building toward a dramatic climax. Adelaide and Matthew may get their villain, but the cost may be high.

Interviewing the Dead by David Field.

Confronting the Invisible by David Field.