“The Pieta in Ordinary Time and Other Stories” by William Cook 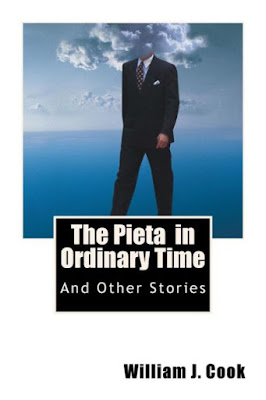 Dark stories, dystopic stories, and how people fight with and respond to dark and dystopic times – these are the stories of The Pieta in Ordinary Time by William Cook. These are also stories that make you question even thoughts, beliefs, and events that are neither dark nor dystopic.

In “The Last Refuge,” A man is desperate to get to his family in Seattle, even though he knows a terrorist bomb has destroyed the city. But he has a problem of identity: he is Muslim, like the bomber. In “Drum,” a boy is given a Christmas present that drives his parents crazy. “Oyster Drill” tells the story of a woman, away from her family for years, visits a dying brother. “The Copilot” is the story of many whose life is defined by missed opportunities.

Other stories concern a hitchhiker with serious problems, a fishing trip that goes awry, a woodpecker that is slowly driving a homeowner mad, a child who’s visited by the voices of angels, a young man who unwittingly entraps his politician father, a singer who bores her audiences, a serial killer who keeps showing up to confess his crimes to a priest, a soldier with PTSD who sees a winery as an enemy fortification to be taken, a father and son trying to deal with the consequences of an automobile accident, and more.

The title story is a moving tale of a mother desperately trying to come to grips with the death of a wayward son, and she finds a way forward through a memory of visiting the New York World’s Fair in 1964 and seeing Michelangelo’s Pieta in the Vatican Pavilion.

Cook is a former seminarian and mental health worker who has turned to writing. He’s published one previous short story collection, Catch of the Day (2018); the novel Songs for the Journey Home (2014); and four novels in the Driftwood Mystery Series. He lives in Oregon.

Be provoked, be occasionally shocked, be surprised, be thoughtful and moved – these are the emotions evoked by the stories of The Pieta in Ordinary Time.