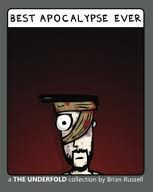 How does a cartoon strip begin? Some start as cartoons in college newspapers. Others are born in the middle of terrible experiences, like war, to help make sense out of the chaos. And then there are those born on the index cards identifying various beverages served during Sunday worship services.

Welcome to Brian Russell’s cartoon The Underfold, which he has now collected and published as The Best Apocalypse Ever.

I started following the Underfold adventures about a year ago, and the cartoon was already a year old at that time. Now I get to see its origins, its early phases, and its development from those index cards (coffee, decaf , hot water) to a full blown strip of modern (and church) angst told with understatement and wry humor. 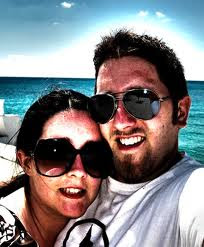 What I didn’t expect was the cartoonist serving as strip archeologist, identifying all of the influences and where all the twists and turns have come from – like the television series Lost, Harry Potter, Mystery Science Theater 3000, The Amazing Race, Planet of the Apes (the Charlton Heston version – the one I saw in the movie theater when it was first released), Dr. Who’s phone booth, Avatar, Spiderman (I think) and zombies, among a lot of artifacts of modern culture.

So know I know where some of my favorite characters came from – like JB (who wears a shopping bag over his head – now I know why) and The Eye (don’t ask: it’s gruesome). And, of course, Brian, the dude with the goatee. And why they do some of the things they do – like when Eye starts a blog (“What are you making a blog for?” he’s asked. “Do you have to have a purpose for a blog?” Eye responds.)

It’s all crazy good fun – and a great collection. In fact, it’s the annotated collection, which Eye might want to blog about. Or JB become depressed over. Or Brian to ask “What?” Or that hand puppet who looks like an upside lunch bag, but don’t tell him that.
Posted by Glynn at 5:00 AM

Now i'm going to have to check it out!!

Thanks, Glynn.
This book sounds refreshing!

Best Title Ever. That's for sure. (I'm a sucker for good cartoons because they share so much with poetry and light verse.)