Happy Birthday to the Better Half

At one time, Memorial Day always fell on May 30. Then came the leisure society and the three-day weekend, and Memorial Day became the last Monday in May.

My wife was born on May 30, back when May 30 was Memorial Day. Her father was career military, with service in World War 11 and Korea, so the day has a connotation for her beyond a birthday.

This year, her birthday falls on Memorial Day, “like it’s supposed to,” she says. It also doesn’t officially happen until later tonight. “It’s not my birthday yet,” she said as she woke up this morning. (Although she did choose to open birthday cards this morning; just saying…) 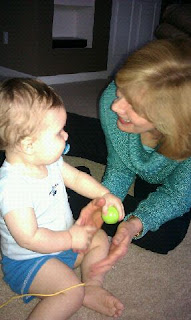 Photograph: Cameron and his grandmother, by Stephanie Young.
Posted by Glynn at 10:25 AM

Happy birthday to her! :) Lovely pic!

Something about husbands' public statements of love is especially touching.

Well, hopefully there was money in that card, and she knew she would need it for those weekend sales (wink). Sounds like a smart woman to me... and a smart man for honoring his wife on her special day. Drop by to see how we are celebrating this weekend. Blessings to yours.

What very special people the two of you are ... birthday greetings to her!

Happy Birthday, Janet! And a humble thank you to your beloveds who served our country.

Happy birthday to your wife! She must be a wonderful lady to have a guy like you :) (errr most of the time).