Enchanted by a Speech

It was a little more than 20 years ago. I was attending a speechwriters’ conference in Chicago, and the keynote speaker was Kathleen Hall Jamieson, a professor at the University of Pennsylvania. Few of us had heard of her, but she has just published a book entitled Eloquence in an Electronic Age, about how radio and television had reshaped and transformed political speechmaking, and not necessarily for the better.

This period – the early 1990s – was a critical time for corporate speechwriters. Reorganizations, restructurings and downsizings were taking their toll. A number of corporate executives were beginning to take their speeches cues from the political world and beginning to experiment with “key message points” from which they would speak extemporaneously. People were saying that speeches longer than 10 minutes were becoming extinct. Speechwriters were beginning to feel like dinosaurs after the meteorite hit.

Some 250 us were gathered in Chicago. Jamieson, who had been a speechwriter for a congressman for many years, had turned to the study of modern political rhetoric. And she understood how television and radio – with the emphasis on sound bites and “cool” speakers – were profoundly changing politics and elections. (If you’d like to know where today’s political incivility comes from, a lot of the seeds were sprouting in the late 1980s and early 1990s.)

Jamieson, in her keynote address, defied expectation and convention. She spoke for an hour without pause. And you know all that stuff about short attention spans? Right out the window. We were mesmerized by her speech. The entire group was silent, completely captivated.

Actually, I was enthralled. Completely.

She changed my speechwriting life. I read everything she wrote. I changed how we did speeches at my company, and instead of falling victim to the electronic age we took full advantage of it. We produced scores of quality, award-winning speeches, the kind that got noticed and quoted and reprinted. We flew in the face of all the conventional wisdom.

Ultimately, we only delayed the inevitable. Eventually, executives retired and new ones appointed, and then came the message-point barbarians. But for six years it was incredible. And this was before the internet  had become ubiquitous. 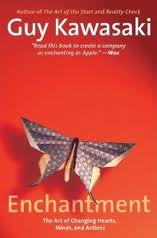 What Jamieson did in that speech was precisely what Guy Kawasaki describes in Enchantment: the Art of Changing Hearts, Minds and Actions. Over at The High Calling, we’ve started a new book discussion on Kawasaki’s book. Today’s discussion covers chapters 1 and 2: “Why Enchantment?” and “How to Achieve Likability.”
Kawasaki offers a number of definitions for enchantment, but the one I like best is a process by which situations and relationships are transformed (the book is about how that happens and what you can do to make it happen). He lists five situations when enchantment is necessary – aspiring to lofty, idealistic results; making difficult, infrequent decisions; overcoming entrenched habits; defying a crowd; proceeding despite delayed or nonexistent feedback.

Kathleen Hall Jamieson did exactly those things in her speech – 20 years before Kawasaki wrote his book.

And I was enchanted.


If you’d like to learn more about Kathleen Hall Jamieson, who’s authored or co-authored some 17 books since 1990, here are some resources:

Her faculty page at the University of Pennsylvania web site.

Her entry at Wikipedia.

Some of her books:

Eloquence in an Electronic Age

The Obama Victory: How Media, Money and Message Shaped the 2008 Election (contributing writer)

Electing the President 2008: The Insider’s View

Packaging the Presidency: A History and Criticism of Presidential Campaign Advertising
Posted by Glynn at 9:49 PM

A Ragan conference? i love this correlation. We keep trying new techniques, but really -- they are all the same at their core.

Will my speech, my writing, my actions be enchanting?

I think you could be keynoting, now that you're the eloquent sage. I'm cheering. This is a good book to apply to all parts of life.

SHe sounds absolutely enchanting, Glynn. I have no problem listening to a long speech--as long as it's good. In fact, when the speaker is good, I want even more! Sounds like that is where you were with Ms. Jamieson. We'll talk more about the message later in the book. Thanks for linking up today!

I really like that, about taking back rhetoric. Some things lost need to be reclaimed.
And this: "And we would have to do all of this without knowing whether we would be successful or not."
Yeah, just do what we know we should do without worrying about results so much. (That's hard for me.)